Online since the 1990s, the UK’s first wave of onshore wind farms are approaching the end of their 25-year life cycle. Repowering and life extension are attractive options for developers, but project success is dependent on understanding landscape context as Chris Calvert, executive director of Pegasus Group, tells Ross Davies.

In March 2020, the UK government announced it would lift its controversial ban on subsidies for new onshore wind projects, as part of the nation’s pledge to become a carbon-neutral economy by 2050. Whitehall’s U-turn on the funding block, introduced by then Prime Minister David Cameron in 2016, marked a clear victory for both climate campaigners and wind farm developers who have struggled to get their projects off the ground.

And yet, according to trade association RenewableUK, only 23 new onshore wind projects were rolled out in 2019 – a fraction of the 400-plus wind farms recorded generating carbon-free electricity in 2014. But bringing a new onshore wind project online can be a tricky business, requiring developers to jump through various hoops. Making the case for clean electricity is the easy part; much harder is the process of winning planning consent by convincing local councils that large turbines won’t pose any visual or sonic annoyance to the residents.

This has led renewable proponents to examine the benefits of eschewing building turbines from scratch and repowering existing projects instead.

In many ways, the case for repowering or life extensions has never been stronger, with several of the UK’s oldest wind farms – granted planning permission back in the early-to-mid 1990s – now approaching the end of their 25-year lifespans.

A case in point is Kirkby Moor. Situated at the edge of the Cumbrian Mountains on the southern boundary of the Lake District National Park, it is one of the country’s oldest wind farms, coming online in August 1993. Following a public enquiry in 2019, the site was granted permission by a government planning inspector to continue operations through until 2027.

The time extension for the project – consisting of 12 Vestas 400kW turbines with 41.8m tip heights – has been hard-fought for its operator Ventient, for which the first application for planning permission was turned down by the local district council in 2017. This was on the grounds that it posed a detrimental visual impact to a region recently awarded Unesco World Heritage Site status.

But following a two-year fight, Ventient’s appeal was upheld by the Planning Inspectorate for England and Wales in 2019. Much of the inquiry hinged on whether the time extension was effectively the same as repowering the site, as defined by the UK National Planning Policy Framework (NPPF), which the inspectorate concluded to be the case.

Much of this boils down to semantics and technicalities. The NPPF first states that, unlike new wind farms, repowering projects for existing wind farms do not require the support of the local community to go ahead. The district council, opposed to the extension, also questioned whether letting Kirkby Moor continue operating the same as it has done for the past quarter of a century could be directly described as repowering.

“Obviously, a lot of people will say repowering could involve taking off the old turbine, putting on a new set of blades and a new generator – that’s repowering,” said Michael Hoar, a planning officer with South Lakeland District Council to BBC News in 2019. “But by simply taking an existing wind farm, making no changes to it physically or in any other way, is that repowering?”

According to Chris Calvert, executive director of Leeds-based planning consultancy Pegasus Group – which advised on the Kirkby Moor project – the public inquiry in 2019 was “an important milestone case”, insofar as how ‘repowering’ should be defined.

“Repowering is an umbrella term, under which life extension and also replanting is found, whereby all the turbines are replaced with – typically – fewer but larger turbines with more capacity,” he says.

Calvert also provided landscape consultancy services to the Hagshaw Hill wind farm near Douglas in South Lanarkshire, Scotland, which was approved for repowering in February 2020. Like Kirkby Moor, Hagshaw Hill belongs to the UK’s first wave of wind farms, having been built in 1995. Their paths to repowering, however, could not have been more different.

“Understanding a site’s landscape context is key to understanding the consenting risk. For example, replanting is a more realistic option in Scotland and Wales than it is in England.”

Unlike its counterpart project south of the border, the decision to repower Hagshaw Hill with 14 turbines, up to 200m in height and with over 20MW of energy storage, was met with no local objections and enjoyed the full backing of the local planning authority. Support has also been upheld by Scottish Natural Heritage. So, what’s behind the divergent trajectories?

“Understanding a site’s landscape context is key to understanding the consenting risk,” explains Calvert. “For example, replanting is a more realistic option in Scotland and Wales than it is in England. Compared to Kirkby Moor, Hagshaw Hill is in a less sensitive landscape. There is also a cluster of wind farms already in the location that had been deemed suitable on a number of separate occasions.”

Calvert believes that if the onshore wind industry is to truly reap the benefits of repowering and time extensions in the future, projects need to first be critically analysed and assessed at the design stage. This entails having a clear understanding of a project’s environmental constraints, opportunities and risks to consent.

“Kirkby Moor demonstrates that with the right approach, the time extension of existing renewable energy developments is achievable, even in comparatively sensitive locations.”

“The baseline is looking at an existing wind farm and its effects in both planning and environmental terms,” he says. “That’s looking at the impact on noise, ecology, ornithology, ground conditions and hydrology.

“It’s also about appreciating the material impact of a wind farm being in a landscape for 25 years and beyond. A good scheme should always get the support of the local planning authority and go a long way to dealing with most of, if not all, the local residents’ concerns.”

Which brings the topic back to Kirkby Moor. The repowering of the wind farm elicited four different types of responses from members of the public, says Calvert. There were long-time residents who had opposed the project from the get-go in 1993; a middle-ground who, while hostile at first, had subsequently grown used to the turbines; and a third category veering that were effectively ambivalent, neither supporting or objecting to life expansion.

Then there were others who questioned whether leaving the 40m turbines in place for the better part of the next decade could truly be thought of as progression in the UK’s bid to become carbon-neutral by the midway point of this century.

New onshore wind projects rolled out in 2019 in the UK.

A role to play

From the perspective of developers at least, life extension – if viable – is an attractive option. After all, allowing a project’s original infrastructure to remain in place is far cheaper than decommissioning and reconstructing new, larger turbines.

“Do these older wind farms have the capacity to make the biggest contribution to clean electricity? Probably not – but does that diminish their value in combatting change? No, it doesn’t,” says Calvert. “In the case of Kirkby Moor, it has proved itself year-onyear to cut carbon emissions in a harsh environment. Yet, some people still view it as a kind of experiment.”

Pulling Kirkby Moor offline would, therefore, “make no sense whatever”, adds Calvert. It would also be difficult to make up the shortfall in clean power.

“The lesson to be taken from Kirkby Moor is that where an appropriate development is put forward – with the impacts and benefits thoroughly assessed – the benefits of renewable energy can be demonstrated to outweigh the harms.

“Kirkby Moor demonstrates that with the right approach, the time extension of existing renewable energy developments is achievable, even in comparatively sensitive locations.”

Local objection to onshore wind farms – whether they be new builds or those advanced in years, such as Kirkby Moor – should not be dismissed out of hand as parochial nimbyism. Turbines are colossal structures, which make their potential visual impact for residents living close by a genuine concern.

As Calvert rightly points out, it is, therefore, up to developers to make their case around the bigger picture: one that makes clear that onshore wind has a role to play in cleaning up the UK’s electricity supply and ensuring a net-zero carbon future. 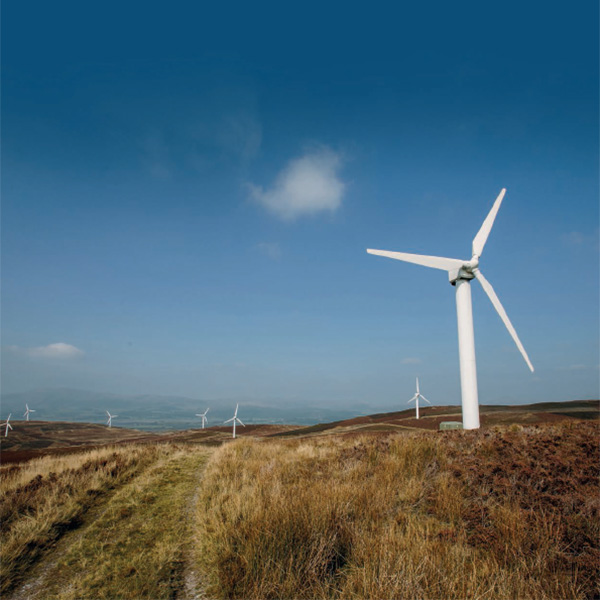 Kirkby Moor wind farm, one of the oldest operational wind farms in the UK. 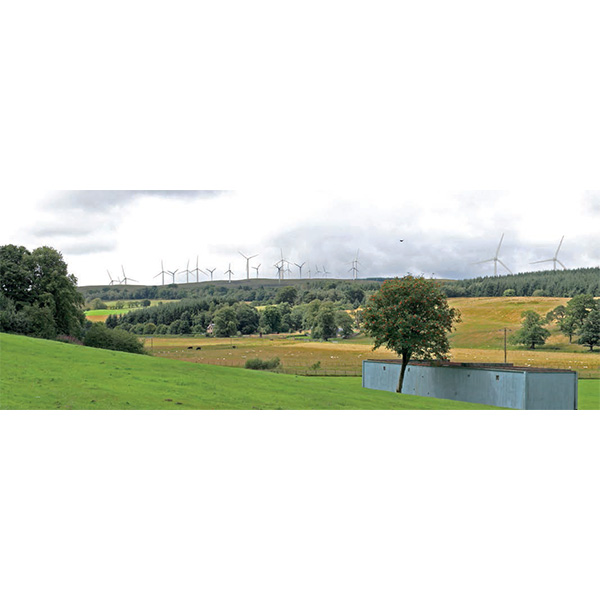 Built in 1995, Hagshaw Hill wind farm was a part of the UK’s first wave. 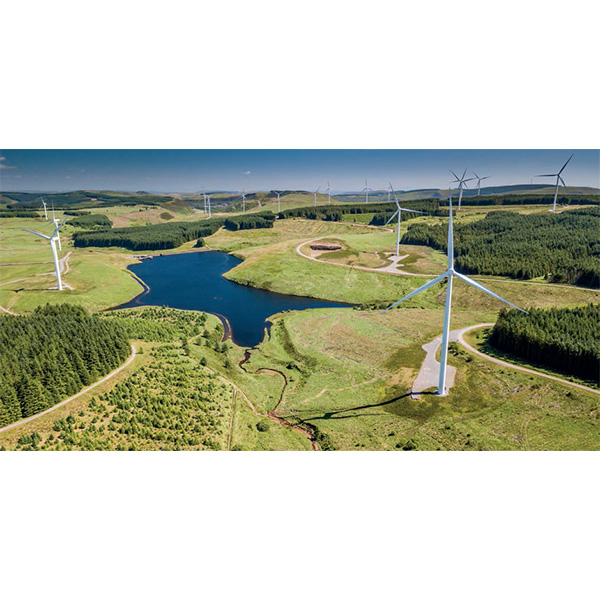