World Wind Technology talks to Frederic Hendrick, vice-president of offshore wind at Alstom Renewable Power, about the company's new generation of wind turbines and its ambitious plans to become a major player in offshore wind power.

Can you tell us a bit about Alstom? What is so special about your new-generation wind turbine?

Frederic Hendrick: Our company has 30 years' experience of designing and implementing proven and reliable wind power solutions. The expertise and vision of our team allows us to consistently offer cutting-edge technology to our customers.

When developing a turbine dedicated to offshore wind, we decided to create a new design from scratch, rather than adapt an onshore concept.

The Haliade 150-6MW is a three-bladed turbine designed for use in offshore wind farm developments. It has a 150m-diameter rotor, a rated power of 6MW, and can reduce maintenance costs and improve the competitiveness of offshore wind. The turbine is suitable for sites with a reference wind speed of 50m/s (ten-minute average), a 50-year extreme gust speed of 70m/s (three-second average) and can withstand the severe challenges posed by the marine environment

How does it meet the challenges of the offshore wind environment?

At offshore sites, the wind is usually stronger and more regular, and the turbine has been built to withstand such high reference speeds. As well as wind conditions, the marine environment requires a machine that is simple, robust and efficient. Our new turbine works without a gearbox (by direct drive) and is fitted with a permanent magnet alternator to reduce operating and maintenance costs. With fewer parts, the risk of failure is less important.

The Haliade 150-6MW is also very robust. It's fitted with Alstom PURE TORQUE technology, which protects the alternator by diverting unwanted stress from the wind to the turbine's tower, optimising performance. Greater efficiency is offered through a 150m rotor - the 73.5m blades ensure an improved load factor. The structure of the blade is a co-development between Alstom and LM Windpower, which ensured the creation of a small root diameter and optimised rotor hub size.

The wider idea was to design a machine that could improve the competitiveness of offshore wind through greater efficiency. With annual energy production 15% higher than the current generation of large turbines, the Haliade 150-6MW ensures reliability as well as outputs that are high enough to reduce the cost of the electricity generated. In fact, it is able to generate up to 40% more electricity per kilogram than the current generation of offshore turbines.

You've just launched new plants in Saint-Nazaire, what was the logic behind this?

In France, the successful development of the Haliade 150-6MW has enabled an EDF Energies Nouvelles-led consortium, the exclusive supplier of which is Alstom, to win three projects in a recent tender launched by the French Government. We are going to deliver a total of approximately 240 offshore wind turbines generating 1.4GW of wind power off the coast of France.

We have officially launched the construction of a new factory in Saint-Nazaire: the first one fully dedicated to offshore wind. After a 30-year period without inaugurating a factory inside France, the group is committed to creating about 1,000 direct marine renewable energy jobs in the country. The industrial plan should also generate approximately 4,000 indirect jobs among its suppliers and subcontractors.

The Saint-Nazaire plants will be entirely devoted to assembling nacelles and manufacturing generators for the Haliade 150-6MW offshore wind turbine. The two adjacent industrial buildings will cover approximately 2.5ha on about 14ha of land throughout Montoir-de-Bretagne, within the harbour zone of Saint-Nazaire. They will be scaled for a production capacity of 100 machines a year. In 2014, those plants will take over from the temporary workshop in Saint-Nazaire where we are already busy producing early series of the Haliade 150-6MW. By 2015, two other plants in Cherbourg intended for the production of blades and towers will be completing this industrial scheme.

The plants at Saint-Nazaire and Cherbourg will employ about 300 and 500 people respectively. Qualified workers with experience in electro-mechanics and handling of large components will account for more than 60% of the workforce. 15-20% of engineers will be hired for positions in standard production methods, quality control and logistics. At first, staff working in the temporary Saint-Nazaire workshop will be transferred to Montoir. Hiring will begin at a later stage, gradually intensifying from 2014 to 2018, with a peak in 2016. Lastly, an engineering centre specialising in the marine renewable energy sector - which is expected to employ a total of 200 people, 80% of which will be engineers - will open in the Pays de la Loire region. Recruitment has already begun for this centre.

How do you think your involvement with the US Department of Energy (DoE) will strengthen your position in the wind market?

The DoE's advanced technology demonstration programme is intended to achieve large cost reductions over existing offshore wind technologies and develop viable, reliable options for the US. Through this effort, the US's first offshore wind projects could enter commercial operation by 2017.

Alstom is a member of a team led by Dominion Virginia Power, which has been awarded a $4 million grant by the DoE to complete the engineering, site evaluation and planning phase for an offshore wind demonstration project in the state of Virginia. This award strengthens our position as a leading player in the worldwide wind market. The Dominion team's proposal includes the installation of two Haliade 150-6MW offshore wind turbines approximately 22 miles off the coast of Virginia Beach. These units would be fully integrated with the state's onshore power grid and feature innovative foundations.

Elsewhere, the Haliade 150-6MW has been specially optimised for North Sea wind conditions, where most of the European market is currently situated and will be for the foreseeable future. Our target is to be ready for the future UK round-three project and offshore projects in Germany.

Are you hopeful that the construction of these plants will trigger 'a new industrial cluster' for marine renewable energy in France?

We'll be outsourcing a considerable part of our production volumes so it is crucial to develop a network of local subcontractors. To this end, the group has met with over 500 businesses since 2011 in order to position itself as a genuine local economic force.

In late 2012, a three-day event was organised for suppliers, with the help of the Regional Chambers of Commerce and the Industry for Lower and Higher Normandy Region and Pays de la Loire; each day attracted 150-300 small-to-medium-sized businesses. First contracts with the new plants' component or service providers could be signed as early as 2014, relying in particular on the Neopolia network in the region of Saint-Nazaire.

Our CEO Patrick Kron is certainly confident. He is quoted as saying: "These new plants are the initial steps towards the creation of a French industrial cluster of excellence in the field of marine renewable energies that will meet the needs of the French and European markets."

Alstom is a global leader in power generation and transmission facilities as well as rail transport infrastructure. The group is also at the forefront of innovative technologies and efficient, integrated energy solutions that are environmentally friendly and adapted to customer requirements. With the largest portfolio of products on the market, Alstom covers the entire range of energy sources from gas to wind power. The company's clean technologies generate enough electricity to meet the needs of around 1.2 billion homes worldwide.

With thirty years of experience in wind power, Alstom provides global energy solutions, from developing, designing and setting up wind farms to supplying and maintaining wind turbines. The company offers a wide range of onshore turbines with power ratings spanning 1.67 MW to 3 MW. To date the group has installed or is installing more than 2,200 wind turbines in over 120 wind farm projects with a total capacity of more than 3,000 MW. The group has supplied 20 wind farm projects in France with a total output of more than 250 MW. In addition, the company is in the process of developing more than 750 MW worth of wind power schemes across France.

Alstom is also active in the offshore wind market: it is currently building Haliade 150, the first new-generation offshore wind turbine, with an output of 6 MW. This turbine integrates proven ALSTOM PURE TORQUE technology, which guarantees the reliability of the transmission line. Each Haliade 150 unit will be capable of supplying the equivalent of 5,000 homes with electricity. Characterised by its innovative technology, this direct-drive turbine is suitable for all sea conditions and will deliver offshore power at the best price.

With its Haliade 150, Alstom is the exclusive supplier to the EDF EN-led consortium that has successfully bid for three projects submitted for the sites at Saint-Nazaire, Courseulles-sur-Mer and Fécamp in France with a total of approximately 240 wind turbines. A business plan is being finalised that will lead to the creation of a national French industry that will set the standard in offshore wind power, with four factories being constructed in Saint-Nazaire and Cherbourg. These new resources will be complemented by an Alstom engineering and R&D centre dedicated to marine energies that will be the first and only set-up of its kind in France. 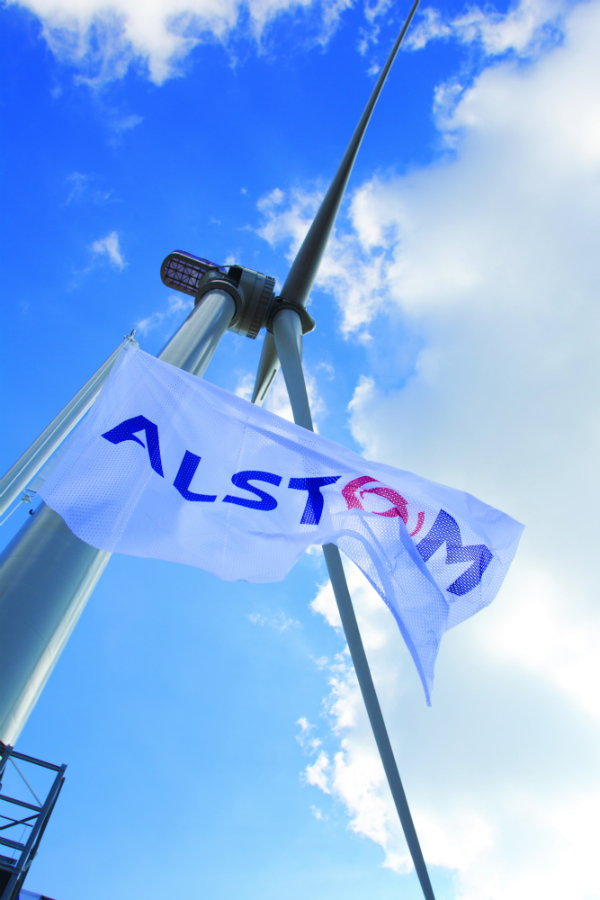 The Haliade 150-6MW is a three-bladed turbine designed for use in offshore wind farm developments. 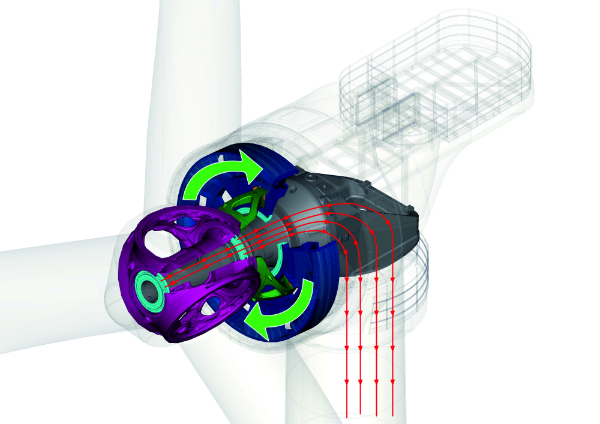 The Haliade 150-6MW has been optimised for wind conditions in the North Sea.