On the back of the successful WINDFORCE 2013 event and the lauded launch of the WINDFORCE Baltic Sea conference, exhibition space at this year's trade fair is selling fast. Offshore Wind Messe und Veranstaltungs event organiser and managing director Jens Eckhoff explains why.

Preparations are already well under way for WINDFORCE 2014, the second offshore industry trade fair in Germany, with exhibition space in Hall 5 nearly sold out.

"With more than 100 exhibitors registered, we have already sold most of the area available," says organiser and managing director of Offshore Wind Messe und Veranstaltungs Jens Eckhoff, who is pleased with this positive interest.

Many that exhibited last year at WINDFORCE 2013 have rebooked their spaces, while others have chosen new spaces because they are looking to expand their exhibitions.

It is also noteworthy that the number of international exhibitors at WINDFORCE 2014 has increased to include, for example, the Netherlands' Damen Shipyards and Dieseko Groups, ROVOP from Scotland, and Indian company Tata Steel. As a result, the idea of setting up a group of national pavilions is under discussion.

The WINDFORCE 2014 trade fair has been expanded to include Hall 4 so that businesses interested in presenting themselves in larger exhibition areas will still have access to attractive spaces.

Eckhoff is equally confident of its continuing growth and appeal. "We are very confident that the popularity of a trade fair dedicated exclusively to the offshore wind sector will continue to grow," she asserts.

WINDFORCE is the perfect forum in which businesses can showcase their products and services to an international audience, while also providing exhibitors, participants and visitors with a platform for discussing current issues. The event aspires to be a forum and network that will prepare for and successfully lead the offshore industry into the future. This combined trade fair and conference format will take place every two years.

"We are confident that the popularity of a trade fair dedicated exclusively to the offshore wind sector will continue to grow."

Offshore wind energy is one of the largest growth markets in Germany and throughout Europe. The increasing exploitation of offshore potential in the North and Baltic Seas provides manufacturers, suppliers and logistics providers alike with enormous opportunities.

Stronger industry networking is crucial if the market is to achieve the herculean task of implementing energy turnaround, Germany's new energy strategy. Germany leads the field in the number of approved offshore projects and German market share, based on the amount of megawatts installed in Europe, is predicted to reach 30% by 2015. This huge market development calls for improved networking and closer cooperation.

Following the successful launch of February 2013's WINDFORCE Baltic Sea event, which attracted 100 international participants to Stockholm, plans for the next conference in Gdansk, Poland, are nearing completion.

On 5-6 February 2014, WINDFORCE Baltic Sea will be held at the Radisson Blu Hotel in picturesque Gdansk. Representatives of offshore wind energy associations in Sweden, Finland, Estonia, Lithuania, Germany and Poland, and many other representatives from across all the Baltic countries, have already confirmed their participation.

"There is no other conference that offers such consolidated insight into the development of the offshore wind industry in the Baltic countries."

"There is no other conference that offers such consolidated insight into the development of the offshore wind industry in the Baltic countries," declares Eckhoff, who is organising the conference in cooperation with the WAB Wind Energy Agency.

During the event, eight themed sessions will address logistics, financing and political framework conditions. Another session will focus particularly on the Polish offshore industry. Mariusz Witonski, president of Polish offshore wind association PTMEW, is expecting to see clear signals from the Polish Government regarding the country's offshore wind policy by the end of this year.

WINDFORCE looks forward to welcoming you to Gdansk.

6,000 visitors were welcomed to Germany's first trade fair for the offshore wind industry and WAB's eighth offshore conference from 26 to 29 June 2012 in Bremen.

The organisers counted altogether 4,600 visitors to Halls 4 and 5 at the Bremen Fair between 26 and 28 June. When WINDFORCE 2012 opened the fair to the public on 29 June, nearly 1,400 visitors filled the halls, there to find out more about the future of offshore wind energy, career opportunities and vocational training, and to use this chance to talk to businesses in the industry. At the Job & Career Market in Hall 4, experts were there that day to answer questions and provide information to the public in brief talks about career choices in the offshore industry.

WINDFORCE 2012 laid the groundwork for success in coming years, and organisers Ronny Meyer and Jens Eckhoff are looking forward to upcoming events. In 2014, WINDFORCE will return to Bremen for the second WINDFORCE trade fair and the tenth WAB conference.

The WINDFORCE conference has become the central meeting place for the offshore wind industry in Germany. 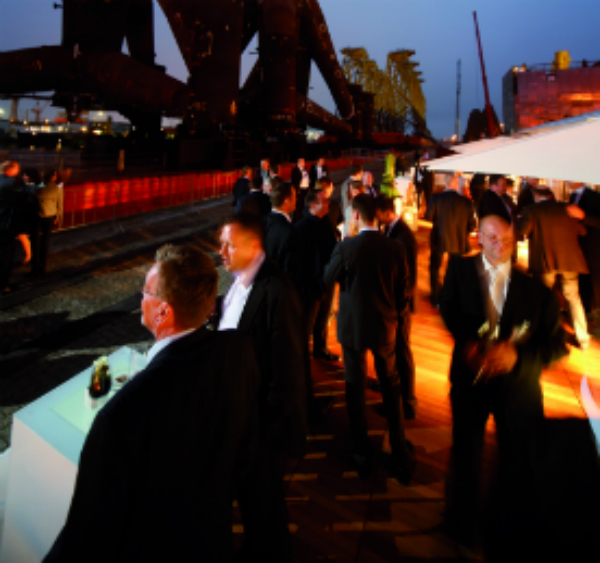 The event is a forum and a network that will lead the offshore industry into the future.