Whales and other marine mammal species are highly sensitive to anthropogenic sound, like that made by pile-driving during the installation of new offshore turbines. Several wind farms in the north-east US, however, have taken an alternative approach that better protects these creatures. Greg Noone talks to Dr Howard Rosenbaum, director of the ‘Ocean Giants’ programme at the Wildlife Conservation Society, and Sophie Hartfield, head of US permitting at Ørsted, about these new mitigation strategies.

On the evening of 24 March 1935, Captain Frank Merritt of the good ship Caliban hauled an 8t, 32ft-long right whale on to the dock at Pompano Beach, Florida. A few minutes later, he posed for a local photographer, blankly staring into the lens of his camera while holding the listless fin of the creature that had almost killed him.

The battle had begun at 9.30am off Hillsboro Lighthouse when Merritt spotted two whales and, on impulse, gave pursuit. The fishing guide decided to spear the smaller of the pair, firing the first of seven harpoons into its flank. Mad with pain, Merritt’s quarry violently dragged the Caliban southward, while its larger companion repeatedly rammed the ship’s bow. Observing the boat was in distress, four other vessels eventually joined Merritt in subduing the pair.

All of them were attacked by the larger whale, whose efforts only ceased when she realised that her companion had bled to death. “It’s just a baby,” said Merritt to an Associated Press reporter, after his prize had been hauled on to the dock. History does not record whether this was said in triumph or regret.

That episode would mark the last intentional killing of a right whale in US waters. It was also, many believed at the time, the last time the species had been spotted in its ancient Atlantic fishing grounds. Reputably named as such because it was the ‘right whale to hunt’ – almost certainly a misconception, as commercial whalers generally weren’t fussy about what cetaceans they were harpooning by the time the phrase emerged in the 1890s – these majestic dark behemoths had largely disappeared from the region.

It was only by the end of the century, after whaling had been outlawed in all but a handful of countries, that the population recovered to around 400 individuals. Dr Howard Rosenbaum wants to keep it that way. As director of the ‘Ocean Giants’ programme at the Wildlife Conservation Society (WCS), Rosenbaum is an expert in marine fauna throughout the North Atlantic. In addition to the right whale, these waters are home to humpback, sei, fin and blue whales, as well as several species of dolphin. “On any given day, and depending on where you’re going – whether you’re inshore or offshore – you may encounter some of these amazing mammals,” says Rosenbaum.

Despite the disappearance of commercial whaling in the region, however, these creatures are still under threat from human activity. Ship strikes have resulted in scores of injuries and deaths among cetacean species, while fishing and anthropogenic noises like sonar can disrupt their feeding patterns and ability to communicate with one another. In recent years, another potential threat has emerged: the large-scale construction of wind farms.

“We know that pile-driving, for example, produces acute noise,” says Rosenbaum, referring to studies documenting harbour porpoises being detrimentally affected by the practice in Europe. Construction might also drive whales into areas of increased fishing or shipping activity – all of which puts them in harm’s way.

One would assume that Rosenbaum and the renewable energy companies plying the shores of New England would be natural antagonists. Far from it. As the conservation scientist explains, he has developed fruitful relationships with several wind operators, which are keen to thread the needle between building a new sustainable energy platform for the region and safeguarding marine fauna from needless harm.

“It’s not that we always agree on everything,” says Rosenbaum. Nevertheless, as part of the New York State Energy Research and Development Environmental Technical Working Group (E-TWG), with a membership that includes wind companies and conservation groups, WCS is slowly helping to develop best practices for construction crews should they encounter whales. “We use technology and grassroots field surveys to learn about these animals, so we can make informed decisions and recommendations,” says Rosenbaum. “Also, we work together, collaboratively, with the various industries and developers that are working in the New York bight to begin to address data gaps and fill [them] in, and even explore pioneering [technologies] for potential mitigation.”

Basic cooperation on conservation issues is a legal requirement for the offshore wind industry operating off the north-eastern US: any vessel longer than 65ft, for example, is subject to federal speed restrictions during right whale migratory periods. For wind farm construction crews and whales to coexist peacefully, however, more needs to be known about where the latter actually are. According to Rosenbaum, wind companies have been valuable allies in researching where and when pods move through the waters off New York. The conservation scientist singles out Equinor in particular for praise, with which he has been working to share information on whale feeding and migratory patterns through E-TWG. “It’s a great collaboration,” says Rosenbaum. “Equinor wants us to publish that data. They’re interested in what we have to say.” In collaboration with WCS and the Woods Hole Oceanographic Institution, the company launched two acoustic buoys in the Empire Wind and Boardwalk Wind lease areas off Long Island. Rosenbaum hopes that the data these sensors are generating will provide a robust baseline on whale activity in the region, which should inform the placement of new wind farms that could generate up to 1,700MW by 2024.

In time, this network could be adapted to become an early warning system for whales passing through the region, prompting nearby construction projects and ships to slow or halt their progress. “We’re beginning to explore some of those things,” says Rosenbaum, adding that such a system is still theoretical. “Right now, we’re just generating the best science to establish those baselines.”

Equinor isn’t the only wind operator pursuing mitigation measures. Danish energy giant Ørsted, which operates the US’ first commercial offshore wind farm off Rhode Island, has heavily invested in technologies that serve to limit the impact of construction on marine mammals. This enthusiasm for safeguarding the biodiversity of the North Atlantic is a natural outgrowth of the operator’s advocacy for the climate through its investment in renewable power generation, according to its US head of permitting, Sophie Hartfield.

“We need offshore wind to help with reducing carbon emissions in the energy mix,” says Hartfield. “Marine mammals are [among] the species that we want to protect by having offshore wind, so we absolutely must be able to construct and build sustainably.” As such, Ørsted has experience with mitigation measures at its European sites, which it is now implementing in the US holdings. These include bubble curtains – effectively, a wall of bubbles released around the pile to mask construction noise – and insulating sleeves, which, as Hartfield explains, are “effectively capsules... to keep the noise within the pile as much as possible.”

Deployment of either solution is contingent on local conditions. “It really does depend on the seabed, the water column, exactly what species you’re looking at, and how deep the water is,” says Hartfield. Understanding what technology works best where is still a work in progress, but has been heavily informed by Ørsted’s work in European waters. “For example, we tend to use sleeves in Germany, but in the UK we’ll tend to use bubble curtains.”

Even so, it could be argued that pile-driving is a temporary nuisance in what is already an incredibly noisy ocean for marine mammals. Are all these types of mitigation efforts therefore worth the cost they incur on construction budgets and schedules? Hartfield very much believes that they are – and that a balance between operational efficiency and conservation goals can be met if operators have the right attitude. “If we plan well enough, and we ensure we mitigate, then actually we should be able to carry out the projects with a minimal impact to the schedules,” she says. That includes not only building practices like pile-driving, but also the transfer of equipment and personnel to wind farms. Protected species observers are often stationed on Ørsted’s crew transfer vessels to spot whales breaching on the horizon and warn other boats to stay away. Service operational vehicles are also considered a viable option by the energy company if a pod or two make themselves known. “We could even use helicopters as well,” says Hartfield.

Like Equinor, Ørsted is also experimenting with an unmanned whale observation system. Developed in collaboration with the Woods Hole Oceanographic Institution, the State University of New Jersey and the University of Rhode Island, the Ecosystem and Passive Acoustic Monitoring, or ECO-PAM, uses acoustic buoys and an undersea glider to spot right whales. “We’d like to roll that out wider,” says Hartfield. Over time, she hopes that the work Ørsted and its partners are doing will inform mitigation measures during offshore wind farm construction all over the world. Rosenbaum agrees. The conservation scientist believes that finding the right way to build offshore wind turbines right now will yield immeasurable benefits in the long term. However, that requires leadership from offshore wind companies to commit to protecting marine fauna for decades to come. “That’s where developers like Equinor and others could be good partners,” says Rosenbaum. “When they site, install and develop offshore wind turbines that are productive, they are going to be there for the long haul. They can be good collaborators and stewards here to be working with.”

Perhaps by using offshore wind farms as staging posts, we can broaden our understanding of marine mammal species like the right whale. The typical lifespan of these vast creatures of the deep, for example, remains a mystery. A clue was provided in 1995, when a large female right whale was spotted floating off Cape Cod, Massachusetts. Known to scientists as ‘1445’, she had been positively identified from scars on her back as the same individual who almost rammed the Caliban in 1935. By the time she died, she was over 70 years of age.

is could be generated by the new wind farms in the Empire Wind and Boardwalk Wind lease areas off Long Island by 2024. Equinor Ørsted’s Block Island wind farm, off the New England coast, is the first such facility to be constructed in US waters. 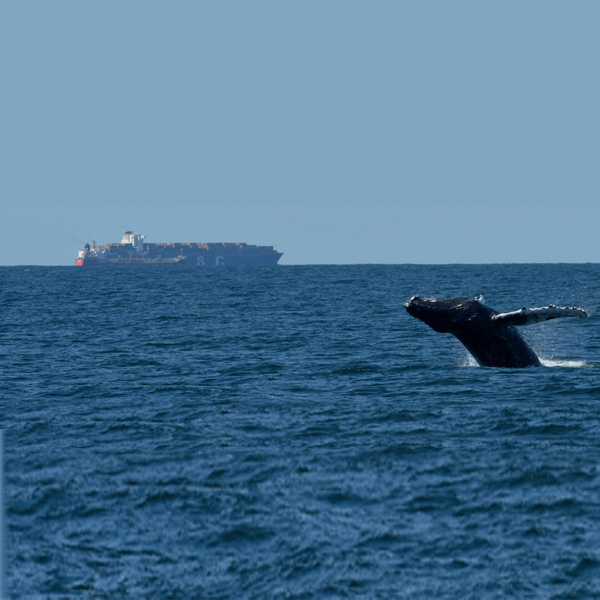 Whaling may be long gone in the US, but they still face many dangers in the North Atlantic, including vessel strikes.