The coming onslaught of higher temperatures and extreme weather promised by climate change necessitates our increasing reliance on wind power and other forms of renewable energy. Nevertheless, the turbines sprouting on our hills and valleys can have their own catastrophic effects on local bird and bat populations. Greg Noone talks to Dr Taber Allison, director of research and evaluation at the American Wind Wildlife Institute, about the scale of the problem and what measures are being taken for its mitigation.

Once a week, onshore wind farm operators across the US send technicians out to look for bodies. If they’re lucky they will find nothing at all, aside from the dirt and grass fanned and shaken below the beating turbines. Sometimes, though, they will discover carcasses strewn across the field, of songbirds, bats and, occasionally, great eagles.

Birds and bats have been colliding with turbines ever since the first ones were raised. The problem is particularly acute in the US. Although passerines (a group that contains over half of all bird species, also known as perching birds) constitute the majority of victims, in 2008 ornithologists discovered with horror that a disproportionate number of the 4,700 birds killed in a year by one wind farm in the Altamont Pass in California were raptors. Similar surveys at wind farms across Appalachia and the Midwest have discovered that bat populations are also at significant risk, with at least 24 different species found prostrate beneath turbines. Wind farms are by no means the greatest threat to bird and bat populations in the US. According to figures compiled by the US Fish & Wildlife Service, bird fatalities arising from collisions with turbine blades or, more rarely, their towers, are predicted to reach up to 500,000 per year. This is much less of a threat than that posed by climate change on species up and down North America, or domestic cats, which are thought to slay billions of unfortunate passerines each year. Unlike rising temperatures and the boredom of our pets, however, the activation and placement of wind farms is directly under our control.

500,000
The estimated figure per year of bird fatalities arising from collisions with turbine blades or towers.
US Fish & Wildlife Service

And even if the number of raptor fatalities, for example, remains low, it could still have a negative cumulative effect on their overall population.

“For eagles and bats, the concerns are about collisions, and trying to understand what puts the species at higher risk of collision and how we mitigate that risk.”

“Once an eagle reaches its adult stage, which is a breeding stage – about four or five years – the probability of that eagle surviving to another year is about 90%,” explains Dr Taber Allison, director of research and evaluation at the American Wind Wildlife Institute (AWWI). “So, any increase in adult mortality may have a greater effect on the population.”

Allison knows more about this problem than most. Formerly the vice-president of conservation science at Mass Audubon, one of the US chapters of the bird protection society, he is currently overseeing the construction of a comprehensive AWWI database of bird and bat fatalities at wind farms across the country. The American Wind Wildlife Information Centre (AWWIC), as it’s called, already stores around 250 post-construction fatality-monitoring studies.

“We recently released two technical reports, one on the summary of the bird fatality data and other summaries of bat fatality data,” says Allison. “They describe the pattern and variation in the data, both among species… the number of fatality incidents, as well as looking at the geographic variation.”

A non-profit founded in 2008, AWWI was formed after both conservationist and energy companies realised that wind energy could have a detrimental impact on wildlife. To that end, the organisation regularly publishes research about the impact of wind energy on the natural world, including peerreviewed assessments on solutions that mitigate collision risk. Its efforts are focused on four taxonomic categories: raptors; bats; migratory birds; and a category AWWI refers to as ‘prairie grouse,’ which includes species like the greater and lesser prairie chicken and the greater sage grouse.

“For eagles and bats, the concerns are about collisions, and trying to understand what puts the species at higher risk of collision and how we mitigate that risk,” explains Allison. “For prairie grouse, the concern is more focused on what we might consider to be indirect effects.” For the survivability of all species concerned, the placement of wind farms is a key factor. While in the case of prairie grouse that is mainly relevant insofar as wind farms could displace them from their usual habitats, for other birds and many bat species the height and speed of the blades themselves are the greatest concern. Turbines are usually between 80–100m in height, with blades in the range of 38–60m, their tips running round and around at up to 290km/h on a normal day.

The aftermath of a collision between a bird in flight and these gigantic propellers is easily imagined. Placing turbines on passerine migratory routes, raptor hunting grounds or in the vicinity of a bat colony and the consequences for each and every one of these populations could be catastrophic.

And yet, why are these species so vulnerable? These structures, after all, loom large over the landscape. They are hard to miss and, one would assume, easy to avoid.

Raptors, for example, are probably aware of turbines in their field of vision. “Eagles have fabulous eyesight,” says Allison. “There is data that shows, [when] you put transmitters on eagles and track their flight through wind facilities, that the vast majority – 95% or more – will try the path through the wind facility that clearly avoids getting close to the turbines. So, they are aware.”

One hypothesis is that those raptors that are struck by turbine blades are distracted in the moment of collision. “When eagles are hunting, they’re focused, looking down… locked in on their prey,” explains Allison. “They’re not paying attention to the air space around them.”

Bats seem to have a similar problem. Twilight observations of them using infrared cameras has shown them exploring wind turbine nacelles from a leeward direction. Reliant on sonar navigation during flight, it has been theorised that these small mammals are somehow attracted to the sounds emanating from the turbines, or else insect populations that gather nearby. One study in 2017 also posited that the number of bat fatalities ran inverse to the amount of grassland in the vicinity of the wind farm, although this theory remains unsupported by other surveys.

The more you know

As more turbines appear across the US, however, it is only logical to ask what the appetite will be among wind farm operators for shutdown procedures of this kind, as opposed to so-called ‘detection and deterrence’ approaches. As a scientist first and foremost, this question is beyond Allison’s pay grade. However, he does concede that it is not yet fully understood which method is the most effective.

“AWWI has funding from the Department of Energy to evaluate both approaches,” explains Allison. “Both studies are currently under way and probably will be completed within the next two years.”

Even so, Allison is adamant that curtailment does work in reducing incidences of collision. More research is being conducted by AWWI, however, on precisely when and why it is effective or desirable. “Right now, it’s just blanket curtailment at low wind speeds,” says Allison of current mitigation systems.

“AWWI has funding from the Department of Energy to evaluate both approaches. Both studies are currently under way and probably will be completed within the next two years.”

More also needs to be known about speciesspecific dangers and the influence of local climactic conditions. Allison is excited by a new system developed by the Cornell Lab of Ornithology, named ‘Bird Cast’, that evaluates weather data, and predicts when and where migrations of birds will occur. The AWWI research director hopes similar software might emerge for bats, which might curtail turbine operations according to the movements of the wind.

All of this work is ongoing at AWWI, which is benefitting a recent infusion of funding from the Department of Energy. Allison is hopeful that the research being organised at the non-profit will result in a much more nuanced and practical understanding of the impact wind farms are having on the natural world: “Having this expanded data set will enable us to get at some of these questions, and do more fine, detailed analysis of risk and impacts of wind energy to birds and bats.” 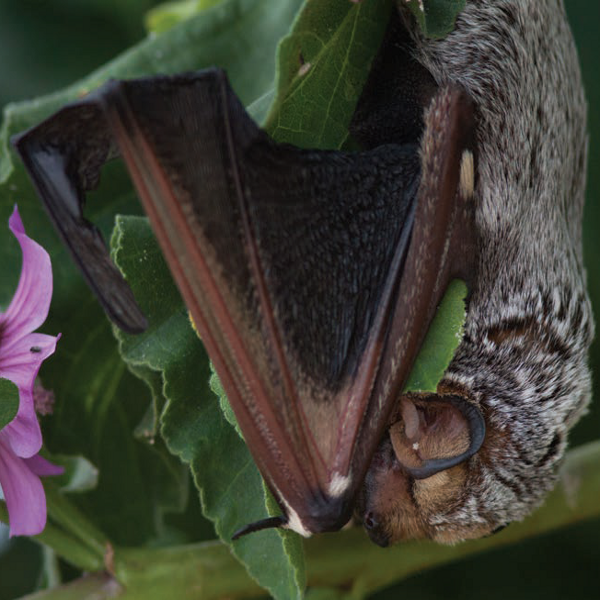 The hoary bat, native to Hawaii, is just as threatened by wind turbines as flighted birds. 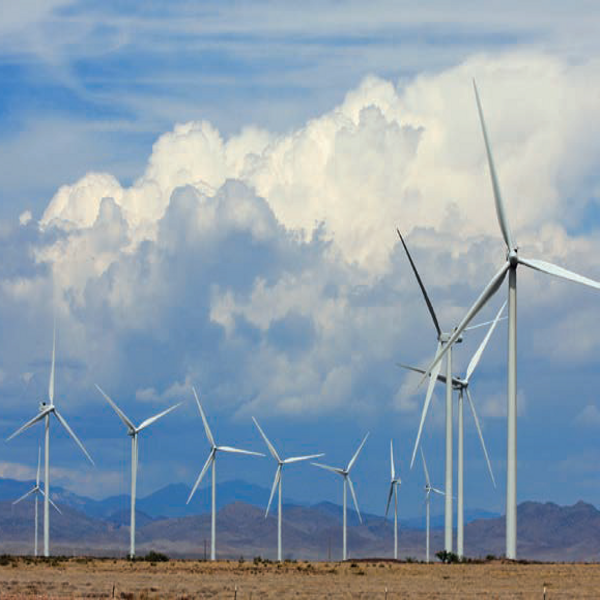 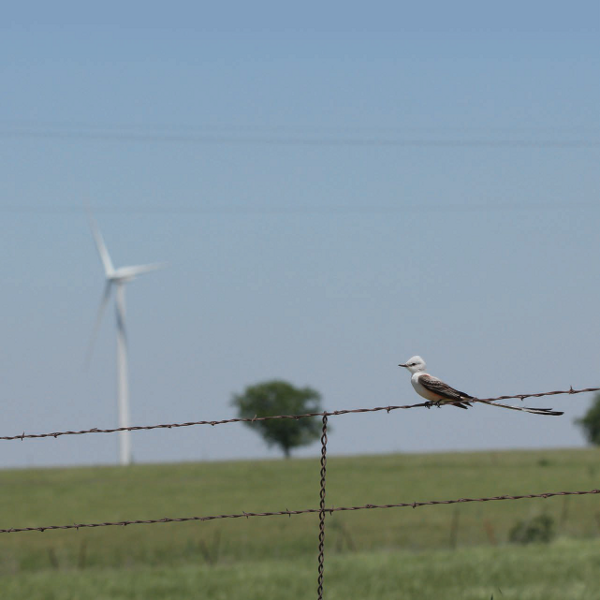