The EU has grand ambitions for wind energy, aiming to install 100,000 new or replacement turbines by 2050. Recent developments in individual member nations, however, suggest that expansion on this scale will not be straightforward, particularly as a whole set of planning and public relations problems remain to be solved. Will Moffitt talks to Peter Enevoldsen, professor of renewable energy at Aarhus University, about the opportunities and obstacles facing European wind in the coming decades.

A crumpled boot on the map, Romania’s south-eastern region of Dobruja is delicately sandwiched between the Danube and the icy waters of the Black Sea. Home to lucid green farmland and rolling hills that morph into craggy mountains and crystal blue lakes, these riverlands have lain on the fringes of one empire or another for millennia. Plenty of clues to this peripherality lie hidden inches beneath the loess, in the charred bones and swords of forgotten kings, or else in the surrounding hills, where Graeco- Roman ruins are scattered like so much rock salt.

Historians will also tell you that the edge of an empire can define events at its centre. Dobruja is no exception. Home to spacious terrain swept by strong easterly gales, the region has the second-largest potential for wind power generation in the EU. The pride and joy of the industry is Fântânele-Cogealac, a vast 2,700 acre plot of land forested by 240 wind turbines, capable of generating enough electricity to power one million Romanian homes a year.

In time, the EU would like to see more wind farms like Fântânele-Cogealac sprout up across its member nations. As part of its ‘European Green Deal’, the bloc envisions wind power as a major facet of its bid to attain carbon neutrality by 2050; a goal that, according to WindEurope, entails the construction or replacement of at least 100,000 turbines over the next three decades – or up to 3,300 every year.

Hitting those lofty targets could be a struggle. 12 countries in the EU failed to install a single wind turbine in 2018, with WindEurope CEO Giles Dickson calling it “the worst year for new wind energy installations since 2011” in the association’s annual report last year.

Ironically, in an age of growing climate awareness, it is good old-fashioned social opposition that poses the greatest threat to turbine installation, according to Peter Enevoldsen, professor of renewable energy at Aarhus University. “There is actually plenty of land in Europe. The problem is that lobbyists and antagonist organisations are so effective that they might move wind turbines from land where wind is prominent and cheap,” Enevoldsen says. “That only leaves you with certain areas to build on, and it becomes more expensive to do so.”

When it comes to where European nations can and can’t build wind farms, Enevoldsen knows more than most. While at Aarhus he covers “everything from urban farming, to storage opportunities, to green transportation”, the Danish professor is also a digital adviser at renewables giant Siemens Gamesa, where he is using new technologies to unearth opportunities the wind sector never knew it had.

In 2019, Enevoldsen and a team of researchers conducted the most meticulous research project ever orchestrated on European wind capacity, using satellite data from global wind atlases to plot a nation-by-nation analysis of the potential barriers to turbine installation. “The resources spent on figuring out where to position wind turbines are enormous and they don’t really add any value,” Enevoldsen explains. Instead, the professor and his team decided to “smooth the transition”, as he puts it, by clearly visualising this vast array of data to show how much wind power potential Europe really has.

The results, published in the journal Energy Policy in 2019, are staggering. While the continent continues to lead the world in wind energy production with around 189GW of installed capacity, the remaining five million square kilometres could theoretically house 11 million turbines – enough, if existing models are taken into account, to meet the entire predicted global energy demand in 2050.

It was a study that was not only undertaken to reveal the continent’s unbridled potential in the form of turbine hotspots, but to refocus energies inland, as large offshore wind farms such as the Walney Extension and London Array gobble up media coverage on account of their capacity to harness vast amounts of wind power.

For some organisations, such as the International Energy Agency, building these swaying structures far out at sea is a sure-fire way of meeting evolving energy demands. The Paris-based organisation estimates that the average cost of offshore wind will fall by 40% in the next ten years, leading to colossal sums of investment.

Enevoldsen disagrees. Instead, he believes Europe should focus its energies on the mainland. “The energy produced from offshore wind is still more costly than onshore, and although many argue that offshore will become cheaper, the only reason they can say that is because we’re not using the best available areas onshore,” he says.

With technology developing at a frenetic pace and the cost of wind power installation at an all-time low, ‘selling’ these projects to locals is now one of the European wind sector’s biggest challenges – particularly as the nature of the complaints and the identity of said complainants can vary from place to place.

Serious opposition to turbine installation can include environmentalists who feel turbines endanger local species of birds and bats in the region; those concerned about noise pollution; and just plain ‘notin- my-back-yarders’ (nimbys), who feel that wind farms installed nearby impinge on their fundamental human freedoms.

No matter the reason, local opposition to wind farm emplacement has been hard for governments, industry executives and climate activists to overcome, even if polls consistently show that support for wind power remains high. Germany has suffered particularly acutely from localised activism. Once the European wind project’s great new hope on account of its ambitious renewable energy targets, only 290MW were installed in the country in the first half of 2019, a fall of more than 80% compared with the previous year according to a joint report by the Centre for Solar Energy and Hydrogen Research Baden-Württemberg and the German Association of Energy and Water Management.

“The resources spent on figuring out where to position wind turbines are enormous and they don’t really add any value.”

France, Europe’s fourth-biggest wind power producer, is also feeling the sting of parochial animosity. It takes nine years on average to get a wind project approved in the country, despite its ambitions to limit its reliance on nuclear energy. According to Le Figaro journalist Marie-Estelle Pech, “From bourgeois people to militants of the far left, anarchists, fishermen and rich landowners, opposition against wind power has become much more eclectic.”

To overcome these challenges and win the PR war, Enevoldsen believes that energy companies and governments need to be more transparent with local citizens, unveiling plans for turbine erection early in the development stage, outlining their benefits clearly and concisely. He cites measures taken by the Dutch government where studies were conducted by government officials on offshore wind farm deployment and the findings being made public as one effective solution. Ultimately, he argues, making people feel part of the development process is a useful way of overcoming local animosity.

“Activities like that are really important,” Enevoldsen says. “Of course, it’s also helpful if a government decides that an area is a wind farm area, because [you can] overcome a lot of those barriers around social opposition. As a developer, you can really speed up the transition.”

Another piece of advice from the Enevoldsen textbook is to be positive about the contribution wind turbines can make to the local economy and to national renewable schemes, if not the wider world.

Alongside the threat of local opposition, the disruption caused by Covid-19 has significantly deflated Europe’s grand ambitions for wind energy in 2020. Supply line delays and shortages of components – such as turbine blades and gearbox bearings – have stretched already struggling networks, and led to major delays in some wind projects across the continent. According to WindEurope, this means that around 4.6GW of additional wind capacity is at risk of being delayed.

Despite this considerable disruption, Enevoldsen remains positive about the future of the European wind sector, arguing that the effects of the pandemic should wake people up to the looming threat of events that are far beyond their control, a psychological effect that should have positive ramifications for renewables.

“I’m 100% certain that people have now realised that Covid-19 is a harsh disease, but it’s nothing compared with what we can expect from climate change,” Enevoldsen says.

From now on, the professor believes that focusing on the socio-political aspects of renewable energy transition will push down energy costs, and make a fully decarbonised energy system more attainable on the European continent and across the world.

To help governments and energy companies do this more efficiently, Enevoldsen and his colleagues are now focusing their energies on developing detailed maps that take the socio-political leanings of European countries into account, factoring issues such as localised opposition to turbine installation into the schema. As his current studies show, while there are problems to overcome, Europe remains a continent bursting with wind potential. Turkey, Russia and Norway are the front runners in this regard, but Eastern Europe – particularly places such as Bulgaria and Ukraine, not to mention the Romanian coast – remains an immensely exciting area for investment, as strong wind speeds and large expanses of flat land can whip up plentiful financial returns. Meanwhile, the sheer size and power of today’s turbines continues to fill Enevoldsen with confidence that the continental wind industry is ready to meet growing energy demands.

“We are seeing some great developments now with turbines being installed with more than 10MW,” Enevoldsen says. “I’m quite positive that Europe can hit those targets. But it will require some action from the government.”

The area of Europe’s landmass that is off-limits because of infrastructure problems, restricted areas and land that is unsuitable for wind power generation.

The part of Europe, in millions of square kilometres, that is suitable for wind farms.
Aarhus University

Additional wind turbines could be installed in the five million square kilometres available in Europe.

The power that could be produced by those turbines, enough to meet the expected global energy demand of 430 EJ in 2050.
Aarhus University 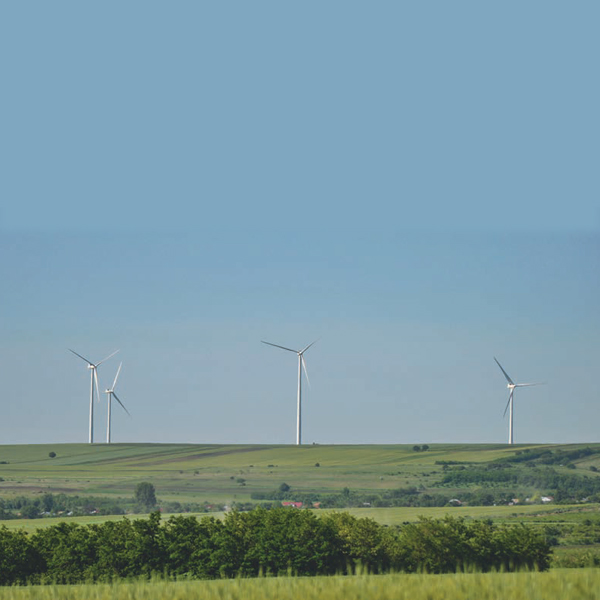 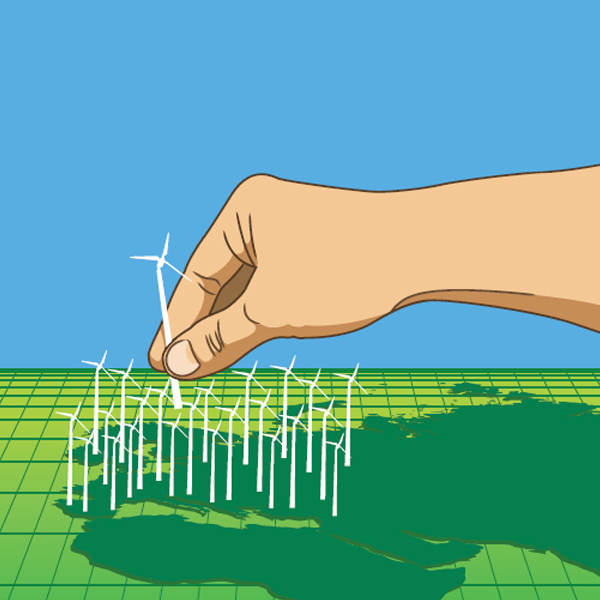