More than a flap in the wind: smart blade control and flap systems

Faced with powerful and sudden blasts of wind, turbines and their blades are put under great stress, and need to be able to withstand such unpredictable and inconsistent wind patterns. Professor Helge Madsen of the Technical University of Denmark tells World Wind Technology what solutions could soon become commercially available in terms of smart blade control and flap systems.

Varying blade pitch and rotational speed is the usual way to control the load on wind turbine blades, but in irregular gusting winds, this method is too slow to react to the extreme fatigue loads the gusts produce. To cope, blades must be made stronger - and heavier.

Smart blade technologies offer an alternative. By changing the aerodynamics of individual blades, the latter can adjust lift quickly and attenuate the fatigue loads. That, in turn, allows manufacturers to use longer or lighter blades to reduce costs, increase service life and optimise power capture.

"You can make two different business cases," says Professor Helge Madsen of the Technical University of Denmark (DTU). "Reducing the loads will reduce the weight of the blade and so make cost savings. Or you could add a few extra metres to the blade on that turbine and increase the average energy production by capturing more power from the same wind strength."

Lift can be reduced passively by using aeroelastic blades that bend and twist in stronger gusts to alter their profile. Actively controlled devices include microtabs and vortex generators, but trailing edge flaps are among the most effective. Modifying flap angle by 2-3% has the same load reduction effect as a 1° change in blade pitch.

"Passive aeroelastic tailoring gives some load reduction, but more is possible with active flaps," says Madsen. "One of the biggest advantages of using flaps is that you can regulate loads at different local positions along the same blade."

Since 2003, DTU's Department of Wind Energy has worked to develop elastic trailing edges - the controllable rubber trailing edge flap - which, when attached to a turbine blade, can actively change shape. Building a flap system without any metals or mechanical parts was a central aim.

"We needed a simple and robust design," explains Madsen. "Instead of using a piston to actuate the flap, we used voids that could be pressurised. Any valves and mechanisms would be at the blade root or in the hub. If we wanted to control two different flaps on the same blade, then we could run two pressure lines out to them."

As well as testing different sizes, materials and structures for the flaps themselves, DTU projects have investigated control systems, sensors and actuation methods, along with many other aspects of load reduction. The INDUFLAP project built on this prior knowledge, aiming to build and prove a prototype device ready for testing at MW-scale. In order for it to be commercially viable, the design also had to be suitable for bulk manufacturing.

Work started in March 2011 with $1.6 million of funding from EUDP (a funding system run by the Danish Ministry of Energy), along with technical and financial support from three industry partners: Rehau, Hydratech and Dansk Gummi Industri. The first goal was to prove that "feed forward" control of the flap delivered precisely the right load reductions in response to gusting winds.

DTU had already developed a numerical model that simulated the aerodynamics of the flap and the forces on it, and how flap movement would reduce blade loads. A vital part of early development, this provided the intelligence for the flap control system.

Rather than using strain gauges in the blade itself as inputs to the control system, the project team instead employed sensor pitot tubes placed outboard of the blade's leading edge to measure the angle and velocity of the incoming airflow before it reached the surface of the blade. The control system feeds that data into the numerical model to calculate the flap angle needed to reduce lift in response to a particular wind speed.

All about the aerodynamics

With previous work showing it took about 100ms for the flap to influence blade lift after actuation, using this inflow data allows the control system to anticipate the actual loading and set the flap to produce the blade aerodynamics required. The team based its calculations on inflow and loading data from an earlier project (DAN-AERO, 2007-10).

"We showed that this incoming flow data could be used to control the flaps so that we could reduce the fluctuating fatigue load on the blades by 35%," explains Madsen.

Other tests using a sensor located 55m from the blade root showed a higher predicted reduction in fatigue loads of more than 40%. With the highest reductions in loading seen at the position of the sensor, it also suggests that more than one flow sensor and flap combination would be needed per blade for optimum load compensation.

Madsen also notes that, rather than reacting quickly to gusts, the flap system could be controlled more conventionally. "You could make a good business case for using a slow actuating system that controls the blade based on the mean power levels or mean wind speed in a quasi-steady way," he says. "You could reduce the fatigue loads at high wind speeds by having a relatively constant positive or negative flap setting."

Next, the team finalised the flap design to be employed in final testing, with simplicity and robustness again being the key criteria. The project team investigated two options: one with the voids used to control the flap running span-wise (from blade root to tip), and the other using chord-wise voids. The former won out.

"If you have the voids in the chord-wise direction, you need to reinforce them, which is challenging," explains Madsen. "But no reinforcement is needed if you build them in the span-wise direction. Simply by adjusting the wall thickness and internal structure, you can keep an undisturbed external shape."

The final flap design is easily manufactured via extrusion and also employs a new mounting method.

Built without its trailing edge, the blade instead features a spar with a reverse-taper female cut-out that a matching male section at the front of the flap simply slides into. That makes a stronger attachment that will be easy to assemble and manufacture, as well as to disassemble for maintenance and replacement. It also means that standard modular flap sections - either active or passive - can be used across the whole blade.

"The trailing edge is a problematic area for gluing," says Madsen. "This way, you can easily attach a different type of trailing edge without changing any other parts of the blade, so it gives manufacturers a lot of flexibility."

Attached to a 10m boom, the test blade section is mounted on the shaft of a Tellus 100kW turbine in place of its normal rotor. Switching connections on the generator allows it to be used as a variable speed motor to rotate the boom and blade at the desired speed.

Put to the test

Intended to close the gap between wind tunnel and full-scale testing, this rig trials prototype blade technologies such as flaps and inflow sensors under realistic conditions that can easily be controlled and varied. Critically, it can replicate the high-g loadings caused by operational blade rotation - something that complex mechanical systems have struggled to cope with in the past - and allows detailed measurements of the aerodynamic loading on the blade section, inflow and structural response to be taken.

"We started measuring the performance of the prototype in the wind tunnel in 2009," says Madsen. "But there is a big jump from there to measuring performance in a full-scale turbine in an unsteady wind and under-rotating conditions. The test rig is a good intermediate step that allows us to test a short, half-scale blade in a rotating, vibrating environment that puts a high-g loading on the flap."

This test, which aimed to check the aerodynamic characteristics and dimensioning of the flap in real atmospheric flow, proved successful. The team found that three degrees of flap angle gave the same load change as one degree of pitch change, confirming the results recorded in wind tunnel tests in 2009.

The final tranche of the project involved analysing the flap's resistance to lightning, which is also vital for commercial use. The team conducted swept channel attachment tests, looking at flashover paths over non-conductive surfaces and possible puncture locations.

"We ran a test on a blade section with the flap installed to see how the lightning was channelled across the blade face and down over the flap," says Madsen. "The results showed that the flap had the same resistance to lightning as a normal glass-reinforced plastics blade."

INDUFLAP has now ended, but work on the flap will continue under the aegis of the INNWIND programme and potentially within a new nationally funded project. Next comes a decision on precisely how the flap should be controlled, followed by further testing on the rotating rig, but this time with involvement of the full inflow sensor and feedback control system. Alongside that, DTU will be talking to wind turbine OEMs about looking at planning full-scale tests.

"The goal was to develop a flap system without any mechanical parts and without any metal materials, and we have succeeded in doing that," says Madsen. "We and our industrial partners have now built up a lot of expertise in this technology and how to manufacture it. Obviously, it will take time to move from this prototype to a production version, but we have presented at many different meetings, and the OEMs are certainly interested," he says.

Although production may be a few years away yet, INDUFLAP's simple, robust and effective trailing edge solution looks like a winner. This project has definitely moved smart blade control a lot closer to becoming a commercial reality.

Professor Helge Aagaard Madsen works at DTU Wind Energy, Campus Risø, which is a new Institute at the Technical University. He has worked with wind energy research, mainly in the areas of wind turbine aerodynamics, aeroelasticity and aeroacoustics, with particular focus on engineering model development for design codes and experimental validation. 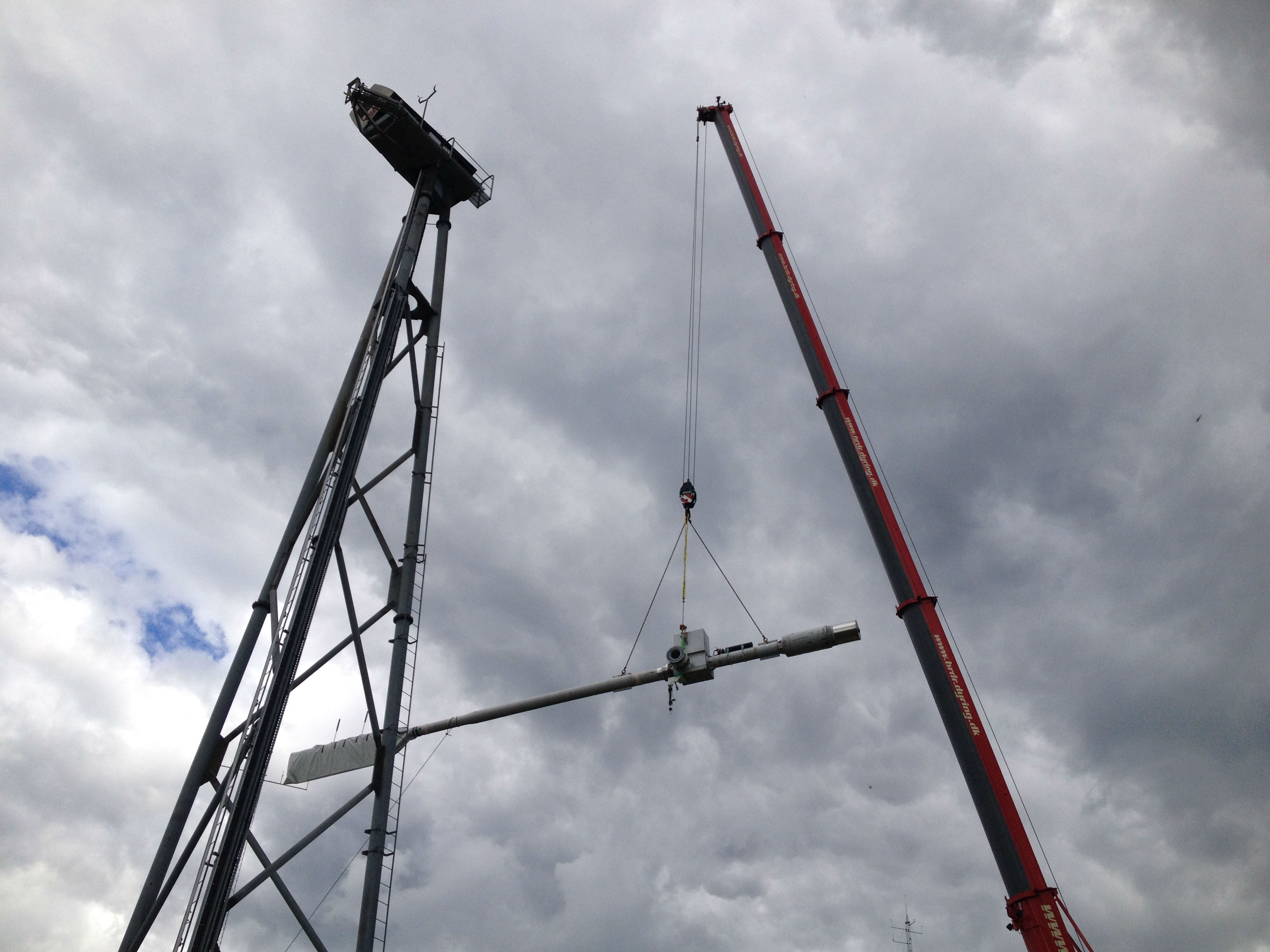 Incoming flow data can be used to control the flaps.
Post to: