When it comes to wind power, too much of a good thing can spell disaster, with intense gales promising to overload and destroy turbines during storms or more extreme weather events. New design approaches, however, could allow them to endure all kinds of tempests – and generate more power to boot. Greg Noone analyses the lengths to which wind companies are going to place their creations in the eye of the storm, and talks to Nicolas Denis, electrical and control engineer at Challenergy, about the durability of its new Magnus turbine during the height of typhoon season.

The locals say it is the most beautiful part of Japan. Situated at the tail end of the Okinawa archipelago, the island of Ishigaki boasts lush forests, pristine beaches and clifftop views that allow visitors to take in the full splendour of the endless, ultramarine Pacific Ocean. For many Japanese people, the island is considered to be a summer refuge from their rushed lives on the Home Islands, a place where the memory of work fades after so many hours spent lounging on its yellow sands or scuba-diving through its plentiful coral reefs.

Not so for the staff at wind start-up Challenergy. For its electrical engineers, Ishigaki is the perfect place to conduct new and multifarious experiments into the integrity of a very strange machine, located on a hill just above the island’s namesake town.

Formally known as the ‘Vertical Axis Magnustype Wind Turbine’, the machine is a mess of white girders 20m high, bereft of all the traditional signifiers of the form – most obviously blades or any elegance in its design. Instead, this contraption – named for the ‘Magnus’ effect, the phenomenon that sees footballs veer off in one direction or another when a spin is applied – generates power through the rotation of cylinders on its upper flanks, the general idea being that these components will continue to generate electricity at wind speeds where blades cannot.

“During typhoon conditions, there is a lot of turbulent wind coming from every direction, changing direction very quickly.”

This hypothesis was put to the test in September 2019, when Typhoon Mitag made landfall in Ishigaki. The storm had already scraped past northernmost Luzon in the Philippines, and forced the shutdown of all financial markets and airports in Taiwan by the time it had reached the little island, whereupon it disrupted all lines of communication there to the point of uselessness. Despite wind speeds of up to 43.2m per second, however, the lights stayed on – at least those hooked up to Challenergy’s 10kW capacity turbine, the cylinders of which continued to rotate throughout the tempest.

As a result, a deal was struck between the start-up and Ishigaki City to allow the latter to use the turbine in another such storm scenario. For Challenergy, the agreement was a vindication of its founder Atsushi Shimizu’s vision for wind power in Japan – and, potentially, any area of the world battered by an annual storm season. And in a climate growing more unpredictable by the day, time is of the essence.

According to the Global Wind Energy Council, the total capacity of the world’s wind farms stood at 0.651TW at the end of 2019. The vast majority of these turbines are conventional propeller models, relying on a wind speed of between 3–13m per second to produce electricity.

As winds approach 25m per second, however, the turbine will be subjected to intolerable levels of mechanical stress. The most obvious place where this is manifested is on the blades, which are being buffeted by the full force of the wind. One shouldn’t forget, however, that the internal components are also suffering, says Challenergy’s electrical and control engineer engineer, Nicolas Denis. “Overpowering usually makes the generator heat up,” explains Denis, to the point of combustion if the turbine isn’t shut down in time.

The Magnus, meanwhile, has several tricks up its sleeve to prevent this from happening, starting with the use of cylinders instead of blades to harness wind energy. “During typhoon conditions, there is a lot of turbulent wind coming from every direction, changing direction very quickly,” says Denis.

A new propeller turbine can change the yaw of its blades to compensate to a certain extent, before it ultimately succumbs to the storm. A vertical cylinder design, however, is much more aerodynamically efficient. What’s more, says Denis, “We can control the Magnus’s force by controlling the speed of the cylinders themselves,” which guards against its operational failure in exceptionally severe weather conditions.

All of this means that the Challenergy turbine can continue to work at wind speeds of up to 40m per second, ideal if you want to keep the lights on during your average cataclysmic storm, and perfect if you need a plug-and-play power source once the clouds have cleared. By this point, however, much like a Formula One race car exiled from the track to the busy city streets, the Magnus’s performance is less than impressive. “For usual wind speeds, it’s less efficient compared with propeller wind turbines,” Denis concedes, adding that Challenergy is working hard to remedy this.

As a response to a perennial problem for East Asian countries, however, the Magnus remains a towering achievement. Moreover, its effect could be transformative in the coming decades, as climate change increases the rate at which typhoons are formed in the placid Pacific Ocean. For remote island communities where the most practical source of energy after all the power lines have been blown over are unreliable, puttering diesel generators, a turbine that continues to work before, during and after such a tempest could be a lifesaver.

The amount of electrical energy estimated to be contained in a single typhoon.

The wind speeds withstood by Challenergy’s Magnus turbine during Typhoon Mitag in 2019.

Things get even more interesting when we consider how much power is contained in a single typhoon. The average tropical cyclone generates approximately 1.5TW of potential electrical energy. That’s not only twice the amount of capacity of the global wind industry, but a quarter of the power needs for the entire planet.

Harnessing the wind to such a degree would also require a great leap in battery storage capacity, something that – for the moment – seems years, perhaps even decades, away from being realised. Nevertheless, enthusiasm for wind power across East Asia has grown markedly in recent years. In Japan, for example, turbines have been embraced as an alternative to nuclear power, the reputation of which was irreparably damaged after the meltdown of the Fukushima Daichii plant in 2011 – incidentally, the main reason Challenergy was founded three years later. The Taiwanese government, meanwhile, has signed numerous memorandums of understanding with the likes of Ørsted, Siemens Gamesa and MHI Vestas to explore how swathes of its coastal waters can be given over to offshore wind developments.

As such, renewable energy companies have been busy designing turbines that can cope with the region’s annual storm season. In Barcelona, a team from General Electric has begun work on a model dubbed, mysteriously, the ‘4.2-117’, which uses smaller blades than its conventional cousins to generate electricity at wind speeds of up to 57m per second. MHI Vestas, meanwhile, has recently begun building wind farms off the coasts of Taiwan and Japan, consisting of turbines that the Danish wind giant describes as ‘typhoon-proof’ with propellers that are longer and more durable than conventional types.

With more and more renewable energy giants entering the East Asian market, the pressure is on Denis and his colleagues at Challenergy to begin rolling out the Magnus in its designated target markets. “I know that there has been a lot of inquiry all over the world for this,” the engineer says, before reeling off a list of countries that includes Mexico, Madagascar and New Zealand.

The start-up also has grand ambitions for the turbine once deployment has begun – although some seem more realistic than others. In 2016, Shimizu told Inverse that he expected the excess electricity generated by the Magnus turbines in typhoon conditions could be stored in hydrogen fuel cells – enough, potentially, to meet Japan's power needs for 50 years. Subsequent press releases in the following four years, however, suggest that this application remains in the experimental stage.

Another possibility is for the Magnus to be integrated into offshore wind generation. “This is one of the visions of the company,” says Denis, and has practical advantages given the planning constraints on wind farm construction in Japan. “It’s somewhat difficult [...] compared with Europe, because there are a lot of mountain regions. And when it’s not mountains, it’s rigid residential areas.”

First, though, the onshore versions must be deployed, with commercial versions of the Magnus being made available by 2021, with prices expected to start at 20 million yen. Although it remains to be seen whether it will, in the end, be edged out of its niche by the likes of MHI Vestas and General Electric, the emergence of turbines like the Magnus promises a rich new vein of exploitation for wind power – one that should, in time, provide much of the world’s energy needs as the climate grows more unpredictable. Certainly for Denis, to continue to see storm-force winds as just something to shelter from is to miss a valuable opportunity: “I think it’s a waste not trying to profit from the typhoon.” 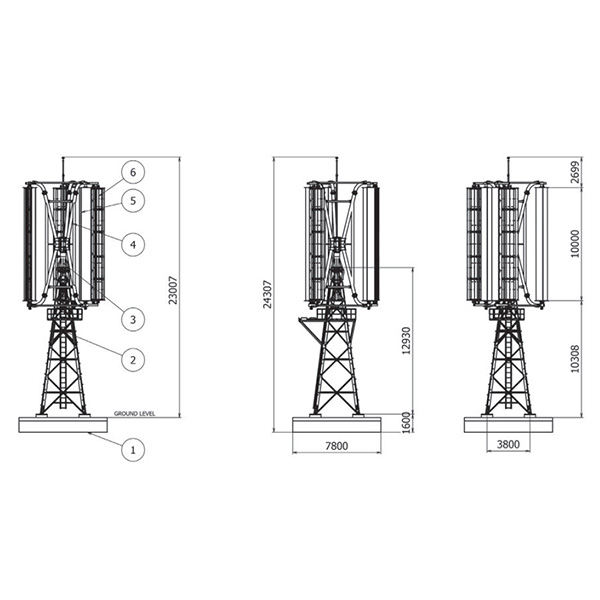 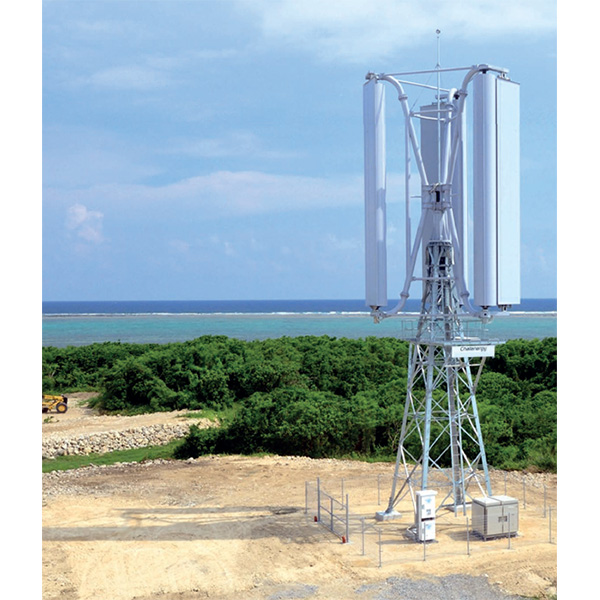 The 20m-high Magnus turbine, set on a hill overlooking the town of Ishigaki. 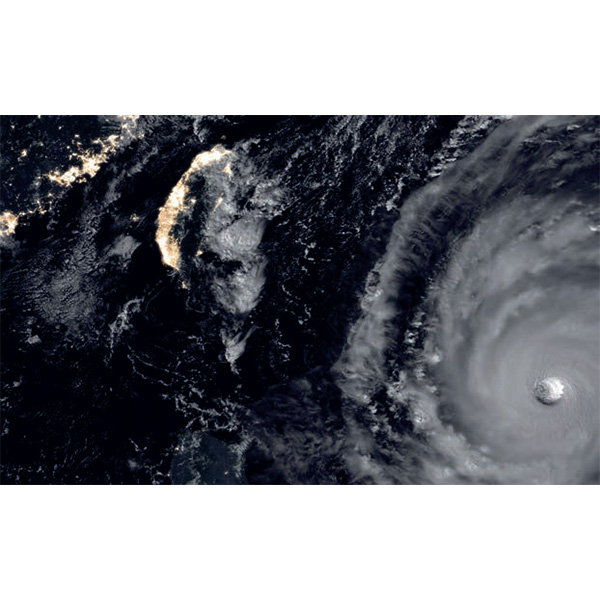 Typhoon Trami, September 2018: climate change will increase the rate at which typhoons form across the Pacific Ocean.
Post to: