Lightning strikes can cause huge damage to offshore turbines, particularly to blades, and are also a key safety concern for crews. Abi Millar discusses the dangers turbines face from lightning, and considers the key methods and technologies used to predict and monitor this threat with Dr Vidyadhar Peesapati of the University of Manchester.

Offshore wind turbines are notoriously susceptible to lightning strikes. Despite advances in protection systems, lightning still accounts for a significant proportion of turbine failures and remains a leading cause of unplanned downtime.

In fact, the damage posed by lightning can be substantial – far more so than would be the case with a typical electric fault. This is hardly surprising, given that the average lightning discharge releases one million joules in a fraction of a second. Back in the 1990s, some 80% of turbine insurance claims related to lightning damage.

We only need think of the German electric power company Energieerzeugungswerke Helgoland, which serves as a cautionary tale in this regard. The company was forced to shut down, and dismantle its Helgoland Island wind power plant, after suffering more than $540,000 in lightning-related damage. It was subsequently denied insurance against further lightning losses.

These kinds of eventualities are rare, of course – and the Helgoland closure took place more than 20 years ago, when protection systems were less sophisticated. However, operators always need to keep an eye towards the worst-case scenario. As the offshore wind sector continues to grow, the issue is likely to become ever-more salient, and failures perhaps more prevalent.

On top of that, turbines themselves are growing in size. The number of failures due to lightning strikes tends to increase with tower height, meaning today’s newer, super-sized turbines are especially vulnerable to damage. If the turbine is left unprotected, lightning strikes can give rise to electrical equipment failure, mechanical damage and even fires.

“Anything tall is usually susceptible to lightning strikes,” says Dr Vidyadhar Peesapati, an electrical engineering research fellow at the University of Manchester. “We all hear of lightning events attaching to tall buildings and structures, like the Empire State Building and the Eiffel Tower. Wind turbines are no different. With wind turbines reaching over 200m becoming more common, their risk of lightning attachment will also increase.”

He adds that tall structures give rise to upwardinitiated lightning – lightning flashes that originate from the turbine and travel towards the cloud. These kinds of strikes tend to occur relatively frequently when objects over 100m are involved.

Up, up and away

Although turbines can be affected by both types of lightning, upward initiated lightning is far more common, and can increase the risk of lightning attachment.

“Tall structures enhance the electric field produced by the thundercloud and thereby give rise to upward-propagating leaders that develop into a lightning flash,” says Peesapati. “There are some great documented studies and research that have managed to capture this phenomenon.”

This is an important area of research since upward and downward lightning strikes tend to occur under different meteorological conditions. If you know when a turbine is most vulnerable, you can maybe slow or stop its activity during this time. More importantly, you can keep crews safe by avoiding maintenance work at lightningprone times.

One million joules
The average lightning discharge release in a fraction of a second.
MIT School of Engineering

One recent study, conducted in a coastal area off the Mediterranean basin, found that lighting threats to wind turbines typically occurred during spring and autumn, even though the majority of thunderstorms arrived in the summer months. The investigation was published in the journal Atmospheric Research, by scholars from the Technical University of Catalonia’s Lightning Research Group.

“Thunderstorms with downward strikes to wind turbines presented particular features, like a limited vertical development and a dominant lower positive charge layer,” wrote the study authors. “On the other hand, conditions for self-initiated upward strikes from wind turbines resemble those reported in Japan and the US winter thunderstorms, with low-cloud-based large electrified stratiform regions.”

These conditions, concluded the authors, should be taken into account when designing lightning protection standards.

Unfortunately, when a turbine is first erected it is difficult to accurately estimate how common upward lightning flashes will be. There are also issues associated with detecting upward lightning. In one study, which looked at lightning data collected at the Gaisberg Tower in Austria during 2000–13, the existing lightning location system (LLS) detected fewer than half the upward flashes.

What we do know, though, is that lightning strikes on wind turbines are more common than might be expected. The prevalence is higher than it is for other towers of a similar height.

Researchers believe this has to do with the blades, which appear to play a role in initiating upward lightning strikes. According to a 2014 study in the Journal of Geophysical Research: Atmospheres, the fast movement of the blade tip can result in electrical discharge, via a similar principle to the rockets that are used for triggering lightning.

“This new type of human-made object reconfirms the idea proposed more than 50 years ago that fast-moving conductors can easily trigger lightning,” wrote the study authors, of the Universitat Politecnica de Catalunya and MIT. “The frequent upward-directed discharges from wind turbines are poorly detected by conventional lightning detection networks and therefore have often been underestimated in risk studies.”

It can also be difficult to detect near strikes – indirect hits that pose less obvious damage to the turbine. For instance, if a near strike causes a small fault in a turbine’s blade material, this may not become apparent until much further down the line, when the blade ends up failing through water damage. In these cases, it may not be possible to trace the failing back to a lightning strike, creating a warranty issue.

“Most turbines have their own weather stations installed on the nacelle. Utilities and manufacturers would probably rely on all information they can gather to understand lightning events and probabilities.”

Secondary lightning effects are another concern. Following a strike, a turbine may experience electromagnetic surges that can damage its internal components.

What this means is that lightning detection and protection remain a work in progress. As Peesapati explains, gathering data on the subject can be challenging.

“In terms of lightning monitoring, a lot of wind farms have weather stations,” he says. “Actually most turbines have their own weather stations installed on the nacelle. Utilities and manufacturers would probably rely on all information they can gather to understand lightning events and probabilities. There are also openly available lightning maps that give an idea as to lightning strike events across the world. They are all trying to record an electromagnetic pulse when a lightning strike event has happened. However, it isn’t easy, as lightning is unpredictable.”

Peesapati’s own work on the subject, which dates back to his PhD, pertains mostly to the blades – the location most susceptible to lightning strikes. While damage to the control system is more common, damage to the blades is usually more expensive and disruptive. Without lightning protection in place, a lightning strike will cause the temperature of the blade to surge and cause an explosive expansion of air, leading to all kinds of problems.

As Peesapati explains, there are a variety of different methods used to prevent this from occurring. These include air termination systems on the blade surfaces, high-resistive tapes and diverters, down conductors placed inside the blade and conducting materials for the blade surface.

He adds that some blade designs incorporate a combination of lightning protection systems, further minimising the risk of damage. It is necessary to manually inspect the blades, to determine when lightning receptors need replacing, or lightning attachment has damaged them.

The turbine itself will tend to use a grounding system, with all the different components integrating lightning protection into their design. For instance, the electrical and control system components typically include surge protection devices.

Go beyond the standard

When designing these kinds of systems, there are a few relevant standards that should be applied. These include IEC 61400-24, ‘Wind turbine generator systems – Part 24: Lightning protection’. First published in 2002, when wind was a relatively young industry, the standards have subsequently been updated. The latest revision, drafted last year, reflects the industry’s improved technical experience and expertise.

The industry is also moving towards a more data-driven approach, harvesting data on a turbineby- turbine basis to predict maintenance needs. As monitoring systems grow more sophisticated (for example, by incorporating polarimetric sensing technology) it is becoming easier for turbine owners to understand the state of play in real time.

This makes it easier to schedule preventative maintenance, mitigating the risk of unplanned downtime. It also improves crew safety, ensuring that in the event of a lightning threat they can evacuate well ahead of time.

While lightning strikes themselves may be unavoidable, there are various strategies that can be adopted to minimise the economic impact. Through adopting a high-quality surge-andlightning protection system, and taking advantage of advances in big data, turbine operators will be well placed to withstand stormy weather. 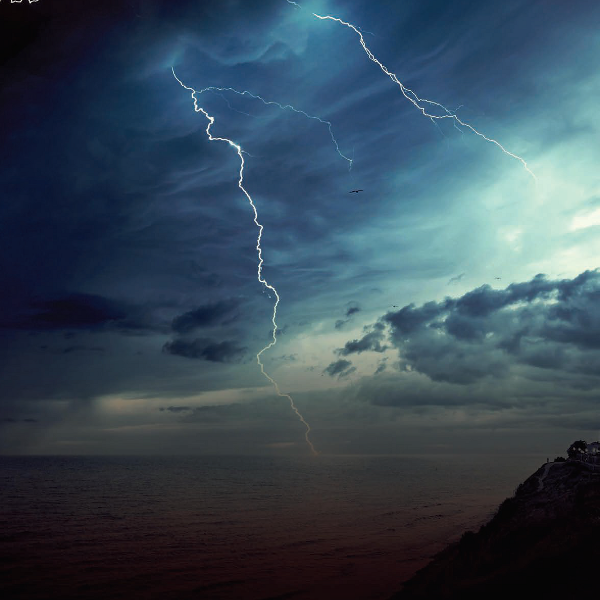