As chief technology officer at Siemens Gamesa Renewable Energy, Antonio de la Torre is leading the company’s digital transformation, and research and development strategy. He talks to Tim Gunn about the advances changing the face of the wind industry, the digital innovation under way at Siemens Gamesa and the challenges of staying cutting edge.

So, your brother bought your parents a voice assistant. Now one of your daughters is nervous about speaking above a whisper when she’s visiting them, which means they can’t hear anything she says, which might be good because she so regularly calls them bigots on account of their Facebook use. She also keeps sabotaging your Fitbit. Still, it’s worse for your other daughter: you named her Alexa.

Before you start thinking about your industry’s digital transformation, Antonio de la Torre, chief technology officer (CTO) at Siemens Gamesa Renewable Energy, suggests you take a moment to consider the one that’s happening in your family. We make a lot of the fact that the only thing easier than staying in contact is ignoring each other, but for him, having children shows that “even when we’re talking about digital natives, person-byperson, everyone has different behaviours”. However digital the world around them becomes, humans remain resolutely analogue.

De la Torre knows that as well as anyone. His job is to manage 25,000 people around the world through a shift to a more digitised way of working. “No one is, to the same degree, prepared to assimilate what should be the advantages of being much more digital than before and to take the benefits of the new technologies,” he continues. “We cannot say, ‘Yeah, we’re great here and everywhere’. No, depending on the different cultures, depending on how people have been maturing with the different processes of the company, the digital transformation can be faster [or slower].”

Still, in Siemens Gamesa’s case, De la Torre feels that CEO Markus Tacke’s passion for leading the industry is the best possible catalyst for the rest of the business. When it comes to leveraging big data, internet of things (IoT) technology, and edge computing to drive efficiency and improve customer outcomes, the CTO calls Tacke the most important to “continuously provide messages about the digital transformation inside the company”, but his openness to change has to be funnelled into Siemens Gamesa’s three main business areas: onshore, offshore and service.

That means that those at the head of each department need to understand their role in driving an effective transformation. “If the relevant people in the management teams of the different business areas aren’t willing to get into digital transformation, because they’re comfortable with the current situation, you will not have any success,” De la Torre explains. For Siemens Gamesa, however, “they provide the themes, the methods and the enablers to make good progress in change management”.

That’s not blind luck. De la Torre became CTO in 2017, but Siemens Gamesa spent a long time before that laying the foundations for him to coordinate its digital transformation. The company maintains the industry’s largest database of historical readings and information, and was the first manufacturer to install smart, sensor-equipped turbines. It now has over 10,000 of those worldwide, all contributing to the exponential expansion of its data stores.

The progress of transformation

That database makes De la Torre’s digital transformation possible, but it’s not the transformation itself. “The wind sector has been gathering terabytes and terabytes of data since the ’90s,” he explains. “It’s a big collection of data and until now, what we did whenever we had a problem was look through all of it to try to find out what that problem was.” Often, the difficulty of processing the information meant it was left dormant until a fault or issue needed to be addressed. “And of course, obtaining conclusions was a slow process,” sighs the CTO. “You had to manage how you processed it and you had to analyse what the data models should be, etcetera, etcetera, before you could actually start a study to obtain a conclusion.”

Over the past two to three years, however, advances in cloudification and edge computing have made it possible for data to be processed on the wind turbines themselves in real time. “It’s a different conception,” summarises De la Torre. “Until, say, two years ago the hardware was a fixed or a given asset with predefined behaviour. Now, with new technologies around IoT and data gathering, we can implement a learning process on the wind turbine to improve the maximum that we can obtain from the hardware.”

This functionality doesn’t require new infrastructure, either. Siemens Gamesa’s energy thrust upgrade can increase energy output on old hardware by as much as 5%, simply by adapting control strategies to the specific wind conditions of a turbine’s location. The life extension programme, meanwhile, is even available for third-party assets.

Implemented correctly for service and maintenance, data insights can actually improve the performance of the humans that work with turbines too. De la Torre points to a common issue for operators in expansion markets, whose assets usually end up being maintained by staff with limited on-the-job training and experience: “The number of faults that they locate, or fault files that they manage, is often very, very reduced,” he explains. However, with edge computing on the turbine itself, it’s possible to identify when human behaviour is unduly influencing an operator’s understanding of its infrastructure.

Indeed, applications like vibration diagnostics detect irregularities to accurately predict more than 99% of all drive-train damage and when a technician visits a site, they’re provided with a report from Siemens Gamesa’s Monitoring Operations and Registration System (MORS) that outlines prospective issues and potential datadriven solutions. The MORS database, which records every reactive and proactive maintenance event, now contains more than two million cases, giving Siemens Gamesa the ability to remotely resolve 85% of all alarms received within 10 minutes. “If you think properly about how to implement the algorithms,” shrugs De la Torre, “then you’ll obtain good conclusions – and quick conclusions.”

Fittingly, the expansion market example reveals almost as much about De la Torre’s personal operating principles as those of his company’s turbines. In conversation, he has a striking way of connecting the human and the digital through the concept of diagnosis. He compares the former model of using the same predefined set of wind turbine behaviours in a range of different environments to judging all blood analyses by one set of ‘normal’ parameters. “When you are applying the parameters of, say, the population in the north of Spain to Kenya, you’re probably going to make a mistake,” he says. In general, hotter climates lead to lower blood pressure, while altitude has a profound impact on haemoglobin levels. “The parameters are totally different and probably the algorithms governing them are totally different, too.”

85%
Percentage of all alarms received by Siemens Gamesa maintenance teams that can be remotely resolved within 10 minutes.
Siemens Gamesa Renewable Energy

In the same way, “the operational environment for a wind farm in Asia has nothing to do with one in Norway or the north of Africa, where you have the desert, which is a very harsh environment”. The benefits of using algorithms to account for that fact work like multiplication factors. “If your turbine is continuously applying derating because of the temperature,” continues the CTO, “the algorithms analysing the different data will be able to tell that it’s operating near Egypt and in a desert, for instance.” As such, they will be able to adjust its operational envelope to balance the derating with all the other relevant variables. “This is the value of doing the right thing, in the right manner.”

As passionate as Tacke, De la Torre, or any of Siemens Gamesa’s segment heads might be about the advantages of bringing data insights right into the centre of their operational model, they can’t simply tell 25,000 colleagues and employees to feel the same way. As such, Siemens Gamesa’s human resources department is perhaps the most important element in De la Torre’s schema of diagnoses.

A good HR department doesn’t treat its colleagues as clones of the company’s founder or CEO, but keeps pace with changes in their demographics, culture and expectations in order to best support them. As De la Torre details, “they have contributed quite a lot in doing a sort of diagnosis into which areas would be the most beneficial places to launch the digital transformation, and which other areas should be subject to pre-training on these new technologies and new ways of thinking.”

There’s that word again. The fondness Siemens Gamesa’s CTO has for repeating ‘diagnosis’ in what might initially seem to be different areas of discussion helpfully illustrates his belief that – whether it takes place in a medical, social, or infrastructural context – it’s a continual process. The answers are always waiting to be found by the right analysis, but what’s ‘right’ changes from moment to moment.

To satisfy the turbine certification bodies, however, De la Torre needed more than a good metaphor. Until recently, they, like everything else in the industry, operated according to the assumption that a functional wind turbine was one that stuck to a predefined set of behaviours. As such, in order to have its equipment certified, Siemens Gamesa would provide a regulator with information about its hardware’s set operating parameters, which would then be tested against the structural integrity of the wind turbine to ensure it was sufficiently strong for those operational envelopes.

Unsurprisingly, a turbine that changes its behaviour according to the information it gathers about its operational environment could only be certified after a change in the regulatory paradigm.

“We have had to work with the certification bodies to prepare for this change in control, or strategy that we’ve implemented,” says De la Torre. “We have defined the what and they have defined the how.”

More specifically, Siemens Gamesa developed the algorithms and machine-learning processes that could implement the new, performanceenhancing turbine controller strategies without impacting the hardware’s integrity. De la Torre explains that his company used that expertise to help assurance providers like DNV GL identify the performance and safety targets for turbines in what he calls the emerging “free operational environment”. That advice was then used as the basis of a new testing regimen.

“It has been setting the path in history, because this has been another step forward in the wind sector,” concludes an appropriately dignified De la Torre. It’s a gravitas that we can all aspire to in negotiating how much homework the digital natives need to do before they can go on Instagram. 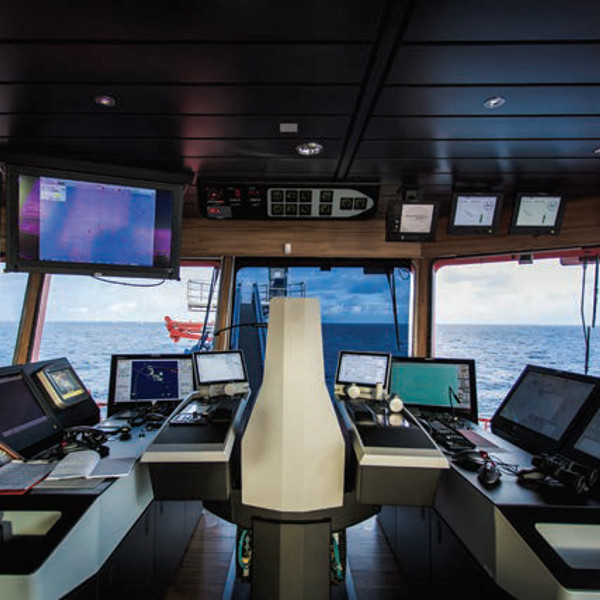 With new technology such as IoT and AI, a learning process can be implemented on the wind turbine to improve its maximum energy output and availability. 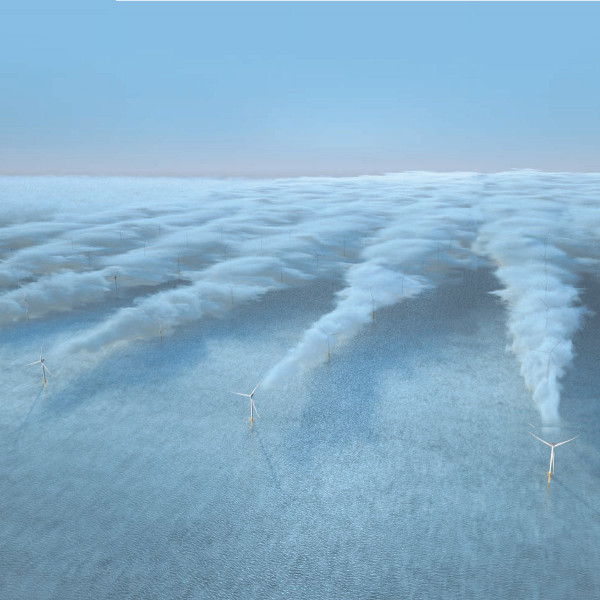