Up in the air

Maintaining offshore wind farms is tricky work, with engineers having to clamber up individual turbines to check out any problems – a recipe for injuries given the height and location of the towers. Yet it is becoming increasingly clear that by using drones, operators can keep the wind farm active from the comfort of their offices. Andrea Valentino talks to Boaz Peled, CEO of First Airborne, and Mirko Kovac, director of the aerial robotics laboratory at Imperial College London, about the latest developments in the field.

The afternoon of 21 February 2016 was like countless others at Gunfleet Sands. The weather was about average for that time of year; winds were down, and engineers were getting ready to check on one of the turbines. What exactly happened next is unclear, but for a brief moment this 172MW wind farm four miles off the Essex coast became big local news.

While working on a jack-up vessel – imagine a moving oil platform, typically used by maintenance staff to help them fix turbines – one of the engineers bashed their leg, resulting in serious lacerations and an emergency helicopter trip to shore.

This was not a unique incident. Over 700 similar accidents were reported at UK offshore farms in 2016 alone. Like the injury at Gunfleet, the majority happened during maintenance rather than development. And just as at Gunfleet, the consequences of accidents were, and continue to be, shocking: amputated fingers and crushed arms are two of the more common injuries, along with knocked teeth and myriad forms of bone fracturing.

All this chaos is easy to understand. Between shimmying up 260ft turbines and being battered with winds that can comfortably reach 150mph, maintaining offshore wind farms is challenging work. Yet the situation is far from hopeless. From bird-like drones to machines that ‘bounce’ across farms, scientists are revolutionising drone technology to monitor and fix turbines. Put another way, offshore wind might soon rid itself not only of lacerated legs and crushed arms, but perhaps even of human engineers altogether.

Before his day ended at Colchester Hospital, that engineer at Gunfleet Sands might well have been working on one of two tasks, both fundamental to the success of offshore wind farms, from Essex to the Long Island Sound. The first is straightforward: ensuring that the turbines themselves are free of faults, and fixing problems as they arise. The second is more subtle. Even when a turbine appears functional, it might actually be operating below its theoretical capacity, wasting energy and frittering away cash.

Both these problems do have solutions, but each is frustrating in its own way. Obvious technical faults – think broken blades or faulty gearboxes – are normally fixed reasonably quickly. But they have traditionally required engineers to clamber into ships and physically visit the turbine in question. As Gunfleet Sands and hundreds of similar incidents each year demonstrate, this approach to maintenance can be dangerous, much more so than other seaborne industries. According to one recent study, offshore wind farms recorded 4.55 ‘incidents’ per million work hours, far higher than the 0.9 per million in offshore oil and gas. In a sense, that fuzzier question of capacity has the opposite problem. Thanks to light detection and ranging (Lidar) lasers, operational monitoring can now be done safely from an office onshore, but that hardly means the case is closed.

Aside from experiencing the frustrations of manoeuvring such bulky hardware into place, says Boaz Peled, CEO of Israeli drone company First Airborne, these lasers can only analyse single turbines at a time. “Maintenance will go in and boost a turbine, then the Lidar will stand there for typically three months and collect data. Perhaps engineers can even diagnose a problem, sort it out and move on.”

The difficulties arise, Peled continues, when the Lidar is targeted at another set of blades. As Peled memorably puts it, that first turbine might soon go “naughty” again, leaving the Lidar and its engineers back where they started. Apart from anything else, these drawbacks end up costing millions. Though the best turbines are designed to last 25 years, Peled describes how patchy Lidar data often means they wear out after just three. What maintenance teams really need, then, is the ability to monitor their turbines quickly and efficiently, something drones are eminently equipped to do.

The amount the UK government has invested in new technologies that have been developed to work in extreme conditions.

As such, a range of unmanned aerial vehicles (UAVs) designed to expedite maintenance operations and associated data analysis have entered the marketplace in recent years. Not that the idea behind offshore drones is particularly new. As far back as 2010, companies were experimenting with sending drones to be their eyes and ears at sea. But as Dr Mirko Kovac, director of the aerial robotics laboratory at Imperial College London, explains, many models are still unable to cope with the fierce conditions of offshore farms. For one thing, sudden gusts can knock machines off course. And because they have to fly so close to the blades, crashes often put both turbine and drone out of action, especially as many existing models are flown manually from shore.

Wind turbines and animals do not normally go well together – according to the American Bird Conservancy, an estimated 500,000 avians are killed each year by spinning blades in the US alone. Yet in their elegance and flexibility, Kovac saw in our non-human cousins the perfect antidote to the cumbersome flying machines of yore. “If you think about how they [birds] operate around trees, how they build nests, or they can interact with trees, there is a lot that we can learn,” he explains. “I think there is a very big impact area, especially in offshore energy.”

In practice, Kovac and his team borrow from nature in surprising ways. Like certain varieties of birds that can make nests from their own saliva, one version of ‘perching drones’ takes everything it needs to build ‘nests’ of its own. On the machine’s underside, it carries chemicals that mix into a foam, the same used to seal wobbly doors and windows. When combined with a printing module for delivery, the robot can create perches for itself and repair cracks in turbines miles from shore.

The drone described by Kovac is hardly unique in its imitation of nature. In Zurich, for instance, researchers at the ANYbotics company have developed machines capable of walking on four legs across platforms. At Heriot-Watt University in Edinburgh, meanwhile, scientists are working on offshore drones that can fly themselves.

“If you think about how they [birds] operate around trees, how they build nests, or they can interact with trees, there is a lot that we can learn.”
Mirko Kovac

If nothing else, this cauldron of activity is reflected by impressive industry growth. The UK government has invested £93m towards perfecting robots in extreme environments, while Navigant Research says the wind turbine inspection drone market as a whole is due to grow approximately $6bn by 2024.

And just as Kovac and his machines are transforming the repair side of turbine maintenance, other experts are working on monitoring. One of the most intriguing examples comes from Peled and his colleagues at First Airborne. Frustrated by the inadequacies of the Lidar, with its single-shot monitoring and ungainly positioning, he began shifting the whole process to drones. That began with the models themselves. Because each machine has its own climate, since zooming through the air creates turbulence and wind resistance, UAVs have traditionally given technicians inaccurate readings as their own numbers got muddled with those of the turbines themselves. But by fitting each drone with special sensors to measure its own climate, First Airborne ensures any interference can be noted and disregarded.

Even better, continues Peled, the drones can be set to fly between turbines automatically. “If you want to know about the wind being harvested by turbine number six – when gusts are up or gusts are low, upwind, downwind or whatever – you simply position the drone through our interface. It will first hop over there, then hop to the next turbine depending on the next mission inputted into the system.”

According to Peled, a single drone can look after about 30 turbines, a breadth that also extends to what they can do. Though performance monitoring is a big focus, they can also be used to check up on alarms, examine blades or record video footage for future projects. And because they require no human input beyond plugging in a mission, offshore wind firms stand to save huge amounts of time and money that would otherwise be spent on shipping engineers out to remote turbines, often in tough weather. And apart from helping with labour costs, automation cuts the risk of human error and diminishes the chances of crashing a piece of expensive hardware into the sea or, even worse, into a £1.6m turbine.

While using UAVs to repair turbines seems like a promising development, the technology isn’t perfect – after all, these drones still have to cope with the unyielding brutality of offshore weather. Both Kovac and Peled are clearly conscious of all this, with Peled describing how the offshore docks for his drones are resistant to seawater and even typhoon winds. Kovac makes a similar point. Borrowing from the natural world once again, he models many of his drones on bees. Just as that insect can be battered by turbulence yet still hop indefatigably from flower to flower, so Kovac ensures that his machines can land on the surface of a turbine even in violent conditions.

This focus on robustness is just as well, given the wind energy sector’s tightening embrace of UAV technology. For his part, Peled argues that drones will become ever more popular, especially as batteries become lighter and charging times faster. Kovac agrees, suggesting that flying machines are the perfect companion for broader changes in how offshore workers use AI and digitalisation. He wonders whether drones might one day “move in concert” with the wind farms that they service, zipping across farms and mending turbines as they report snafus automatically. It’s an image that should have offshore workers at Gunfleet Sands breathing a sigh of relief. 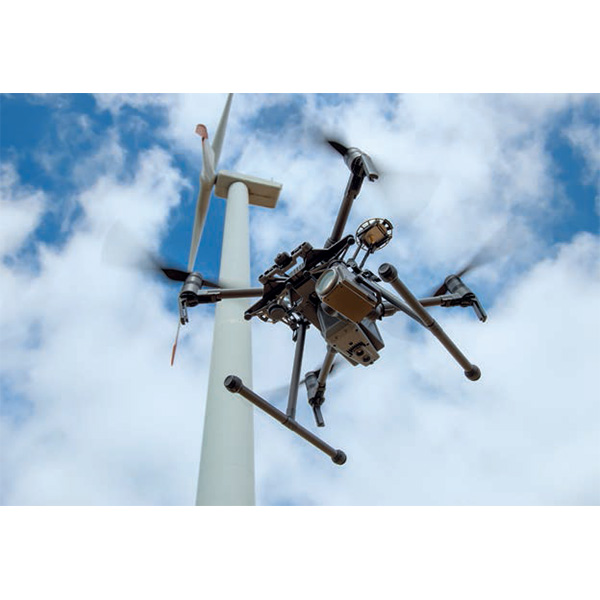 The prospect of drones crashing into turbines is prevalent in the minds of innovators, and can put both technologies out of action. 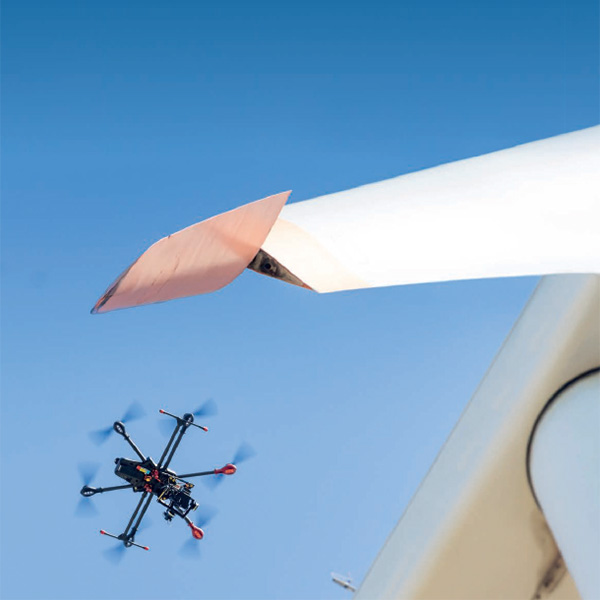