A new design tool from Sandia National Laboratories could help accelerate the development of vertical axis wind turbines (VAWTs). Nicholas Kenny speaks with Brandon Ennis, offshore wind technical lead at Sandia National Laboratories, to learn about the benefits this tool can provide, how Sandia used this new technology to design a cost-effective floating VAWT system – and what it means for the future of the industry.

The form and function of wind turbines has been largely settled for decades. We all know what comes to mind when you think of one – a tall structure with three blades near the top, rotating along a horizontal axis. These horizontal-axis wind turbines (HAWTs) have reigned supreme over global wind energy production since the 1980s – but it was not always so open and shut.

In the 1970s and early 1980s, much of the wind industry was focused on the development of vertical-axis wind turbines (VAWTs). They differ from their horizontal cousins in that their main rotor shaft is set transverse to the wind, and the main components are located at the base of the turbine, rather than the top. This arrangement allows the generator and gearbox to be located close to the ground, making replacement and maintenance simpler and more efficient. VAWTs also don’t need to be pointed into the wind, removing the need for wind-sensing and orientation mechanisms.

So, the advantages of VAWTs were clear to those early pioneers in wind technology. However, there were a number of challenges, too – VAWTs undergo significant torque ripple during each revolution and their blades are prone to fatigue due to the wide variation in applied forces during each rotation, shortening their lifetimes. These challenges are particularly relevant to the Darrieus turbine, a VAWT subtype where the turbine consists of several curved aerofoil blades mounted on a rotating shaft.

The Darrieus turbine was first envisioned about 100 years ago, invented by Georges Jean Marie Darrieus, a French aeronautical engineer who patented the design in 1926. It was later introduced to Canada in the mid- 1960s, when another team of inventors applied for the patent without being aware of Darrieus’ work. From there, a large portion of Canadian turbine development was focused toward VAWTs, and several projects were initiated, lasting until the 1990s.

In the early 1970s, Sandia National Laboratories was assigned by the US Department of Energy (DoE) to investigate alternative energy resources and quickly learned about the Canadian VAWT research, explains Brandon Ennis, offshore wind technical lead at Sandia. “Sandia has a really storied history with studying VAWTs,” he adds. “When Sandia’s wind energy department started in the ‘70s, it was in response to the [1973] oil crisis. The government started to realise that energy is security, and Sandia, being a national security lab, was commissioned to perform research in different energy spaces, including renewables.”

The VAWT concept then became the focus of Sandia’s renewable energy research, and led to its involvement in Project Éole in Quebec during the mid- 1980s – the tallest VAWT to date, at 110m in height, though it was shut down in 1993. “From the ‘70s through to the ‘90s, Sandia designed, studied and created tools for studying VAWTs, creating the largest body of knowledge for VAWTs, especially in terms of experimental data,” Ennis notes, until challenges around vertical-axis turbines and the limitations of the technology at the time led most of the industry to turn their focus to HAWTs.

The US DoE, however, continued to hold a torch for VAWTs, due in part to its potential use in areas where conventional wind turbines were unsuitable. While the US has great wind resources over land, these areas are often far away from the main population centres. Offshore wind, despite being considerably more expensive, could provide energy generation near key load centres – namely, US cities based on the east and west coasts.

In 2019, the DoE’s ARPA-E funding office launched a grant programme aimed at developing megawatt-scale vertical axis turbines for offshore wind farms. Sandia was announced as one of the awardees for their floating offshore VAWT project, dubbed ‘ARCUS’ – which takes the Darrieus model and makes some modifications to it, aimed at addressing the issues with traditional versions of the platform.

VAWTs offer unique advantages for floating offshore wind, potentially reducing costs as they have no need for yaw systems, and boast improved aerodynamic efficiency and a lower-level placement of the turbine’s drivetrain that greatly reduces floating platform mass and associated system costs, according to ARPA-E.

“Floating offshore wind is three to five times more expensive than land-based wind in the US,” says Ennis. “Part of the challenge is that you have a very complicated system. There are significant cost contributions from multiple components – from the turbine, the platform installation, operation and maintenance. […] You can’t really solve one cost in isolation, you have to come up with a design that minimises all of the costs to see meaningful reductions in the total levelised cost of energy (LCOE). VAWTs offer a lot of opportunity to minimise that cost.”

In with a VAWT

Currently, Sandia’s ARCUS project has a similar swept area to 12MW and 14MW horizontal-axis turbines, but with a larger generator at 20MW – one of the benefits of a VAWT system is that you can capture higher wind resource energy. However, one of the main challenges holding back the development of modern VAWTs is that it requires switching the architecture of what’s been commercialised and industrialised over the past 20–30 years. Not only do you not benefit from the lessons learned from decades of development that HAWT platforms boast, but you also don’t have the same level of validated design tools.

As a result, before Sandia could set its VAWT ideas in motion, it needed to build software capable of modelling the response of the turbine and floating platform to different wind and sea conditions to determine the optimal design of the whole system. Ennis and his team got to work and created a functional design tool to help Sandia in the design and optimisation of its floating VAWT system.

“One of the reasons that we developed this tool is that we needed a couple of dynamics for a vertical-axis turbine,” Ennis explains. “Because it’s such a large system – we’re designing a utility scale, 20MW system – the aeroelastic effects are important; [as are] the couple dynamics, with the hydrodynamics and platform motion. It’s very critical to capture those because they’re very meaningful loads at that scale.”

At the same time, Sandia needs to be able to trust the tool, which poses its own challenges. “That’s very tough when you don’t have the data – you haven’t iterated from design to design and validated your tool,” Ennis notes. “So, we’ve done code-to-code comparisons with horizontal-axis design tools to validate the hydrodynamics, the hydroelastic coupling. We actually pulled some old test data from the Sandia legacy VAWT experiments. And we then compared our predictions with a land-based 34m vertical-axis turbine.”

The other thing Sandia needed the tool to provide was highly parallel optimisation. “Within our project, we’re performing the design in a different way than what’s done commercially,” Ennis notes. “We’re looking at a concurrent control co-design optimisation, where we’re designing the turbine platform and they’re controlled concurrently. So, to do that, it’s much more expensive computationally.”

As a result, Sandia needed the tool to be used easily on high-performance computing clusters with gradient-based optimisation. This helped Sandia’s ARCUS project to iterate on the traditional Darrieus VAWT format. “We call this design a ‘towerless vertical-axis turbine’. The traditional Darrieus VAWTs have a rigid tower that rotates with the blades as part of the rotor. As we were starting this project, we were trying to understand how we could remove mass that’s not directly capturing energy,” he notes. “For floating offshore wind, that’s a compounded effect, because that mass must be supported by additional mass on the platform itself.”

Project Éole is constructed in Montreal, Canada – the largest VAWT in the world.

Project Éole is shut down.

Sandia is announced as one of the winners of this programme for its ARCUS project.

“The system’s blades would be manufactured mostly straight, and then bent into shape – they’re kind of pre-stressed into their curved shape, and then held in that position with tension centre supports,” Ennis says. Once the blades start spinning, centrifugal forces alleviate some of those pre-stress effects. This enables the VAWT to operate at a lower extreme in terms of the strains that the blades see in operation.

Not only is this an efficient way to make use of the composite materials’ mechanical properties, but it also allows for the modulation of the area when the centre supports can be actuated and the rotor dimensions changed. This means the rotor can be brought closer to the water level in high-windspeed cases, which can help reduce the platform’s overturning moment.

“That’s traditionally been a challenge for Darrieus VAWTs,” Ennis notes. “The benefit of the Darrieus VAWT is that the blades aren’t cantilever. So, you carry strain axially – the loads are less for axially-supported Darius VAWTs than they would be for cantilever blades, but you give up the ability to pitch the blade.”

As a result, in high-windspeeds, traditional designs see thrust, and therefore loads, continuously increasing. For a floating platform, this would result in the need for greater mass. Sandia’s Darrieus design, on the other hand, allows for the reduction of the height of the loads, thereby reducing the overall force and moment on the platform.

A tool for the trade

Ennis hopes that Sandia’s recent work on VAWTs and its design tool will aid the wider industry. “The ultimate goal with the tool [is] that it would be commercialised – that a software company would come along and take it to the next level, improve the user experience and interface, and increase its usefulness at a commercial level,” he says.

With ARCUS, Sandia are looking to take it to the next step and to demonstrate the technology. “We’ve done the best we can to trust our design tool, but ultimately we don’t have as much data as we like to be able to validate,” Ennis says. The ARCUS turbine is a deviation from what has been done previously with Darieus VAWTs, so demonstrating it at a meaningful scale would allow Sandia to improve the certainty they have in the performance of this novel rotor.

However, challenges remain. Turning to a VAWT platform means that you’re moving to a less-proven technology. The wind industry is large and can be risk averse – which is why Ennis identifies the need for Sandia to minimise risk in the process.

“For a developer to decide that riskier path, there would have to be sufficient of benefit from the financials – that’s what we’re working to prove,” he notes. “And that’s what we hope our design tool will help others to prove for their different VAWT designs and systems.” 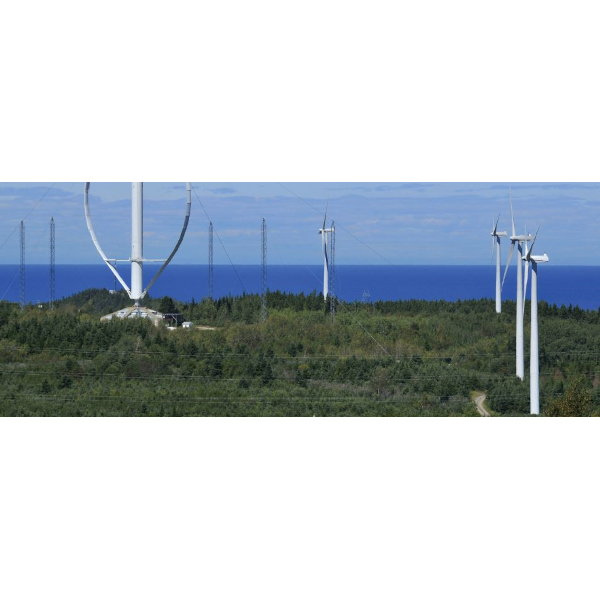 While HAWTs have dominated wind turbine technology, they could soon face a new challenger in VAWT technology.
Post to: