Even though the construction of the Global Tech I offshore wind park is still in its infancy, the benefits and versatility afforded by Liebherr's CAL 45000-1200 Litronic heavy-lift crane have already made it an indispensable part of the project

The crane, which was manufactured at Liebherr MCCtec Rostock and assembled at the Crist shipyard in the Polish town of Gdynia, is part of Vidar, the jack-up vessel belonging to Hochtief Solutions.

The heavy rotor stars, weighing approximately 100t with a 116m diameter, are pre-assembled and loaded onto the ship at the JadeWeserPort in Wilhelmshaven, Germany, about 170km away from the construction field.

During installation in the wind park, they are first lifted horizontally and then rotated to the vertical position using a special pivoting crossbar. At a height of about 92m above the water surface, the rotor stars are then affixed to the nacelle.

Being only the second crane to be built as 'crane around the leg' (CAL) - following the delivery of a CAL 64000-1500 Litronic to the vessel Innovation in 2012 - the design offers several advantages for offshore installation.

The crane is able to rotate around one of the four jack-up legs of the vessel. Thanks to the special design, it can be positioned in a space-saving way despite its enormous size and thus requires a relatively small obstruction area of only 12m. The special twin-boom design means two booms run parallel to each other at a distance of 14m, allowing the boom to be parked over one of the vessel's front legs. This prevents the crane from obstructing free space on deck that can then be used for loading the vessel.

The CAL 45000 achieves a maximum lifting capacity of 1,200t at a maximum working radius of 27.5m. The boom length is 108m, and the dead weight of the crane is 1,500t. Another fascinating feature is the lifting height of over 120m above deck. The slewing ring of the heavy-lift crane has an outer diameter of 13m.

The leading edge of lifting

The combination of slewing bearing, slewing gear, winches and the Litronic control system - all manufactured by Liebherr - enables exact positioning and safe moving of the loads while reducing fuel consumption.

Together with the powerful 4,000kW electro-hydraulic drive, this provides optimum control in all operating conditions. Moreover, in the crane's development stage, special attention was paid to ensure ease of maintenance.

Thanks to the CAL 45000-1200 Litronic, Hochtief Solutions expects to reduce set-up and maintenance times for the newest generation of offshore wind power stations. It will thus contribute to increased productivity.

Being one of the first wind farms in the German North Sea, Global Tech I will consist of 80 AREVA M5000-116 wind turbines with a capacity of 5MW each and will occupy an area of roughly 41km2. After its completion, it will deliver electricity for the equivalent of 445,000 households with an average consumption of 3,130kWh annually. 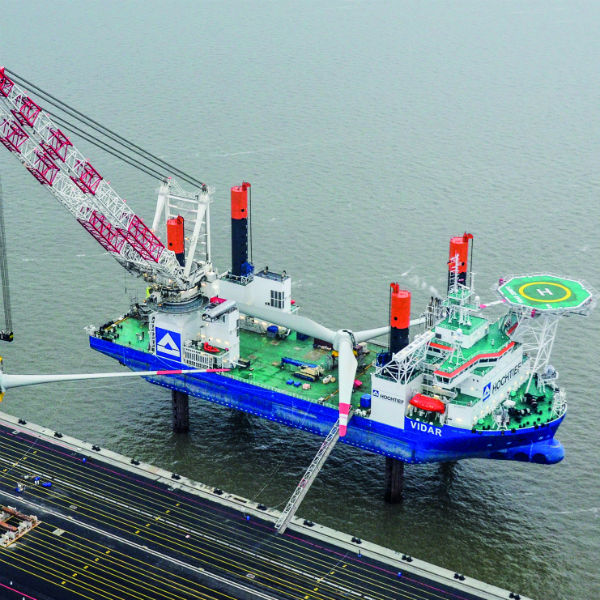 The CAL 45000-1200 loading three rotor stars onto the crane vessel Vidar in JadeWeserPort. 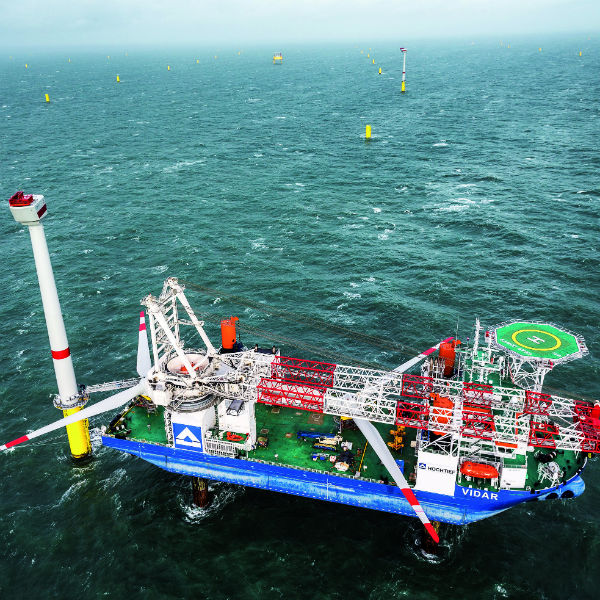