Innovatives Niedersachsen - Forget the windy city; this is the windy state

With a wind energy output of more than 7,000MW, Niedersachsen is by far Germany's number-one wind power state. Innovatives Niedersachsen outlines why wind farms and related manufacturers are attracted to the region.

Wind energy is the cornerstone of the development of an environmentally friendly energy supply and power plant structure in Germany, and the requisite technology is manufactured in Niedersachsen (Lower Saxony). Meanwhile, wind power experts are currently traversing the high seas in search of new offshore wind farm sites and have found the location with the most potential for this is the North Sea - just off the coast of Niedersachsen. Turbines are already in motion at both the Alpha Ventus and BARD Offshore 1 wind farms in this area.

Refurbishing old locations with new forms of technology to make them more efficient is a promising concept, and prototypes of these new, more powerful wind turbines - the 'multimegawatt generation', which have a maximum power output of 6MW - are made in Niedersachsen, too.

The state is also home to two global leaders in wind turbine production, Enercon and GE Wind Energy, as well as newcomers with factories in Emden and Cuxhaven. Niedersachsen has been swift to expand the two towns' ports, making them offshore terminals to accommodate heavy-duty services.

Home to the wind power puppetmasters

The underwater cables used to transmit electricity from wind farms at sea to wall sockets throughout Niedersachsen are 30cm thick and lose next to no energy along the way. Manufacturers Norddeutsche Seekabelwerke and Nexans not only work on the development of these specialist cables, but they also come up with energy-conserving relocation strategies.

Niedersachsen also provides support for connections to external power grids, and is building collective distribution lines for wind farms to ensure that renewable energy is efficiently transmitted to households.

Another draw is Cuxhaven's second offshore port terminal - the largest offshore operations base on the coast of the North Sea - which, following a two-year construction period, has officially opened for business. The new quay alone is almost 1km in length and is best suited to heavy-duty operations such as loading and unloading cargo ships, pontoons and lifting platforms. This process is carried out using floating devices that are firmly anchored and able to serve as floating berths. Floating cranes and tugboats can also easily moor at the quay.

The first of Cuxhaven's offshore industrial terminals was opened back in 2009, and this new addition augments the port's unique facility as an offshore location at the mouth of the river Elbe. The plan for the future is to have five berths operating in Cuxhaven, along with a heavy-load platform and a gantry crane with a 500t maximum lifting capacity. There are also around 80ha of industrial and commercial space located directly behind both offshore terminals.

"With the expansion of Offshore Terminal 2, Cuxhaven has become one of the top base ports for North Sea offshore wind farms," says Andreas Schmidt, chairman of the Cuxhaven Port Management Company. "Its port facilities offer excellent infrastructure for the settlement of new industrial companies, while strengthening the position of offshore wind industry service providers and suppliers already based in Cuxhaven."

Component shipping for the new Meerwind Ost wind farm has been underway at Offshore Terminal 2 since August 2012. Port services provider Cuxport plans to ship 80 turbines to the new location just off the island of Helgoland, construction of which is due to start at the end of 2013. The wind farm is scheduled for completion and commissioning by spring 2015. 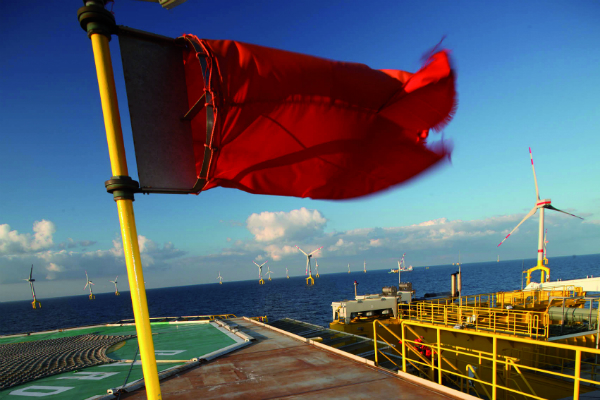 BARD Offshore 1 is just one of the many wind farms in Niedersachsen.