The fabrication of cone sections to be assembled into wind towers for onshore and offshore applications can be an easy task with the new High-Productivity Davi Smart Line - the ultimate solution to increase productivity.

The new Davi Smart Line was introduced to the most important players in wind towers fabrication industry during the Wind Energy 2017 Seminar.

This innovative solution is based on a guide system that adjusts the position of the cone-shaped plate automatically, guiding it along its feeding to the plate roll and slightly rotating it.

This non-stop process enables a cone section to be bent in under ten minutes. It completes the final alignment of the two edges to create a perfect cone section without the need to re-roll, and plate set-up is quick and easy.

The process begins by inserting the cone data into the machine via a screen and obtaining the complete automatic process list. Then the plate is placed onto the smart infeed conveyer, where special pushers automatically move the plate to the centreline, guiding it through until the end of the process.

In detail, the new Davi Smart Line includes the Davi four roll, designed in 2015 with intra frames and steel beams. Its heavy-duty infeed conveyor is capable of tilting, and designed to hold heavy plates of different lengths safely aloft while pre-bending. To guide the cone-shaped plates, the machine uses a continuous cone-forming process enabled by its hydraulic guiding system.

The entire cycle is managed by the Davi iRoll PRO with the new iCone software, specially designed by Davi software developers.

The new Davi Smart Line was introduced to the most important players in wind towers fabrication industry during the Wind Energy 2017 Seminar that took place at Davi headquarter in Cesena, Italy, in October of this year, together with the technical partners PEMA, HGG and Lincoln.

It has been demonstrated live, to illustrate how the rolling process can be substantially reduced - to under ten minutes - by using the machine. It also needs only one operator in a CNC-assisted process for inshore towers, and theoretically should even be able to form a cone in automatic mode.

Davi's new line is the evolution from the well-known High-Productivity Package. It was conceived in cooperation with the most important wind tower manufacturers in the industry.

The Smart Line is also used to create offshore towers. This process is slightly different due to the size and weight of the plate; a progressive step sequence with repeated repositioning of the plate using the guiding system is used.

Davi's new line is the evolution from the well-known High- Productivity Package. It was conceived in cooperation with the most important wind tower manufacturers in the industry to eliminate the bottleneck of the rolling cycle, to reduce labour and improve the bending process with the patented tilting conveyer.

Today, it is truly possible to have an automatic cycle that improves the quality of the rolled cans within the tightest tolerances requested by the market.

The bending process is complete, and the metal sheet is precisely curved. 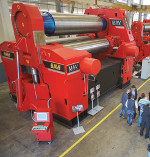